TrustCo Bank Corp. NY (TRST) operates as the holding company for TrustCo Bank. The bank provides personal and business banking services for individuals, partnerships, corporations and other entities.  The company was founded in 1902 and is headquartered in Glenville, New York.

TrustCo business execution is benchmarking, well above it’s peers in the financial services industry. Most  of the regional banks we follow in this sector appear have not demonstrated improvements since the financial crisis.  TrustCo first half of 2010 provided a net income of $14.1 million and diluted earnings per share of $0.183.  The return on average assets and return on average equity were 0.76% and 11.31%, respectively, for the first six months of 2010 and 0.68% and 9.98% for the comparable period in 2009.  In these challenging times for banks, TrustCo has demonstrated significant progress.

On June 17, 2010 SNL released its annual ranking of the top performers from the largest 100 institutions in the thrift industry. TrustCo ranked 11th based on objective analysis of profitability, capital strength and asset quality. They were one of a few select banks to have achieved the highest grade in both good times, pre 2008, and since the financial crisis.

With TrustCo performance above it’s peers, it is surprising that investors can achieve both a  high yielding dividend, and an profitable enterprise basically having  no enterprise value.

Applying this metric would value

The current peer groups trade about 12.83 times cash flow.  If you use the $.44 cents that represents TrustCo’s annual trailing cash from operation that would create an equity value of $5.64.  Adding the cash value per share of $5.52, would give TrustCo a $11.16 market value.

The $.183 per share earned during the last 6 months annualized gives them a PE of 15.  If one applies the earnings to enterprise value, TrustCo would have a run rate of $.36.   Using the 15.27 average PE sector for banks, the company would receives a value of $5.49.  Once again TrustCo seems to get zero value for the cash holdings and their strong cash flow.  When you value the ongoing equity plus cash using cash equity value modeling its value would be about $11.00 a share.

Due to banks profits, mark ups, mark downs, and accounting, the price to sales ratio would not be a fair indicator of value.

TrustCo generated over $34 million in free cash flow from operations in their trailing fiscal year. That works out $.44 per share.  Realizing the value of the entire enterprise is only  2 cents per share, again subtracting out the cash and debt, the return on enterprise (ROE) works out to be an undefined number, because the enterprise basically has a zero value.  With the annual dividend rate of $.264 per share, TrustCo is paying out about 60% of it’s operational cash flow to shareholders.  That is higher than many companies we follow.

TrustCo has emerged from the financial chaos that has ravaged the entire baning industry.  As seen below, TrustCo earnings (green line below) took a major hit when the financial system started to collapsed.   No one in the industry avoided the down turn as evident with nightly news reports of large multinational institutions like JP Morgan (JPM), Citi (C), Bank of America (BAC),  Wells Fargo (WFC) and even General Electric (GE) financial arm,  all  teetering on the brink of collapse.  TrustCo’s dividend payment (red line below) followed earnings lead as operation cash flow simply could not prop up the dividend any more.  Emerging from the storm in the middle of 2009, earnings steadied and were above the dividend again.  Recently TrustCo announced an increase to the dividend signaling strength. 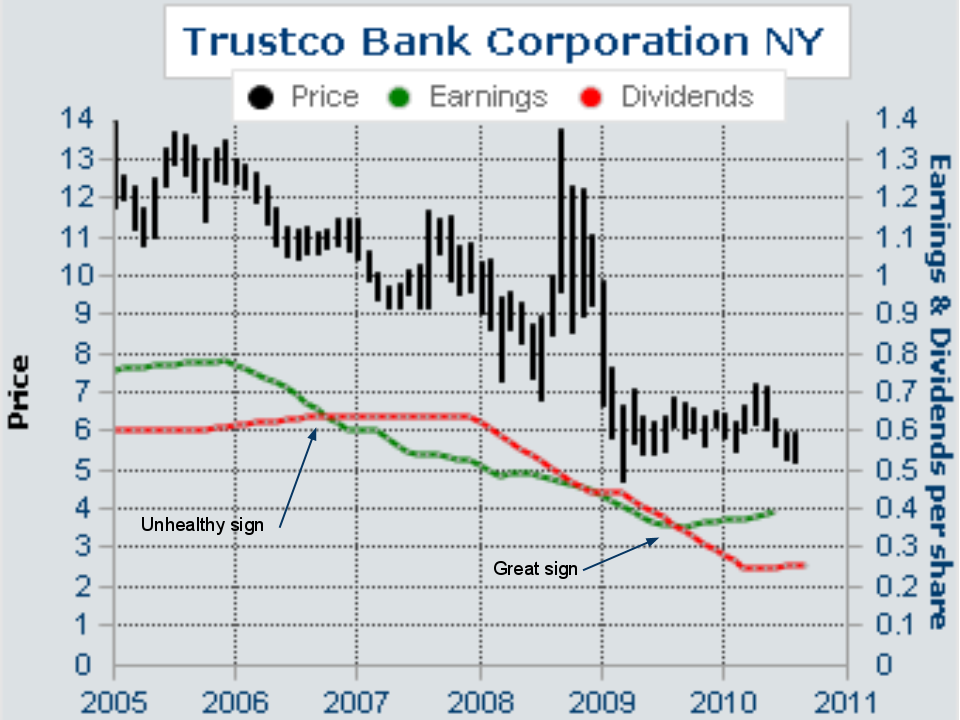 TrustCo level of cash is hiding the outstanding free cash flow generation from operations coupled with the poor performance of the banking and thrift industries.  The high level of cash allows TrustCo more freedom and flexibility to pay the higher return to shareholders funding.

TrustCo started issuing a dividend in June of 1990 and has paid one every quarter since then.  The dividend was reduced on March 5, 2008  and again on June 3, 2009.  This was due to the economic tidal wave that hit the entire banking industry.  Just two years since the chaos, TrustCo announced they will be raising their dividend and are open to lending. (Please see graph below.) 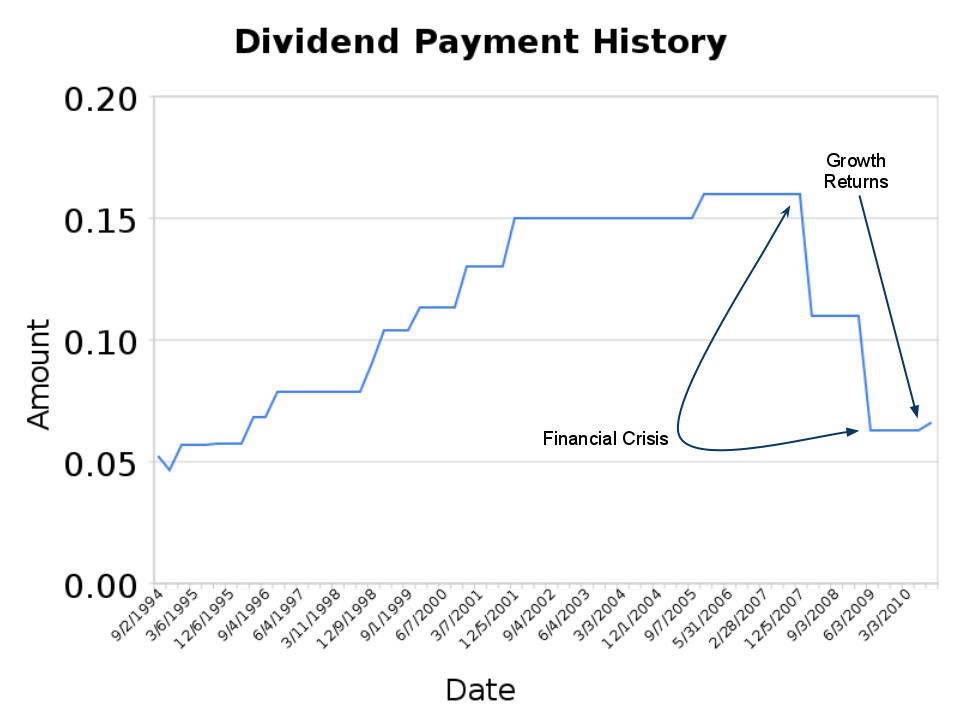 Real Estate Holding
This is where most people are most concerned about the health of the bank industry.  TrustCo cited in the most recent SEC filling dated June 30, 2010 “the widespread disruptions in the mortgage market as a result of the financial crisis have not had a significant impact on TrustCo.”   Further along they say they did not offer the types of loans that were responsible for many of the problems causing the disruptions and that the market it serves also have not experienced the declines realized in other areas of the country.  With SEC statements like this, coupled with the dividend growth, and increased profits,  it appears TrustCo is again demonstrating that the financial crisis that caused many bank to fail, is in their wake.
Lack of management ownership
The amount of stock being held by by  insiders is only 4.28%, a market value of $18 million. Compared to the last company reported on, Adams Energy where the insider owned around 50% of the float and did very little trading with no stock incentive plan, TrustCo has an stock incentive plan and  it seems to be used more for a short term or opportunistic gains by management instead of a long term commitment that shareholders are asked to make.

Interest Rate spread
Currently the cost to borrow money at the  “Federal Funds” rate is .00 to .25.  There is an arbitrage opportunity created allowing banks to borrow money and invest in government debt.  This spread has created profits for banks.  These rates are currently quite attractive and the Federal Reserve is indicating that this policy could be maintained for an extended period of time.  One must understand that this is not sustainable and it could and most probably turn negative down the economic recovery road.  Currently banks are riding a very financially rewarding wave  using a low risk, Federal Reserves Infusion,  for the banking industry to slowly replenish their balance sheets.

TrustCo business appears to be gaining strength even while the economic, banking, and financial derivative markets are providing tremendous adversity.   The market has valued stocks in this sector, such as small banks like TrustCo, as if they are in critical condition and on “Federal” life support.  Based on TrustCo’s positive cash flow,  low enterprise value, and strong balance they appear to be gaining momentum and plotting a successful course.  TrustCo is rewarding investors with a very high and growing dividend rate in addition to  being able to acquire the underlying assets (minus the cash and debts) for free!

Adams Resources for Investment with Income.

The 4th Quarter of 2010: Investment with Income