Earlier this year, Apollo was in talks to either sell CEC or take the company public. Neither has materialized, but either might still be in the works. CEC has excellent interest coverage of 2.5x for the nine months ending September 30, 2017. The company’s 2022 bonds, with a yield-to-maturity of 9% make an excellent addition to the Durig Fixed Income-2 (FX2) managed income portfolio, the recent aggregate performance of which is displayed below. 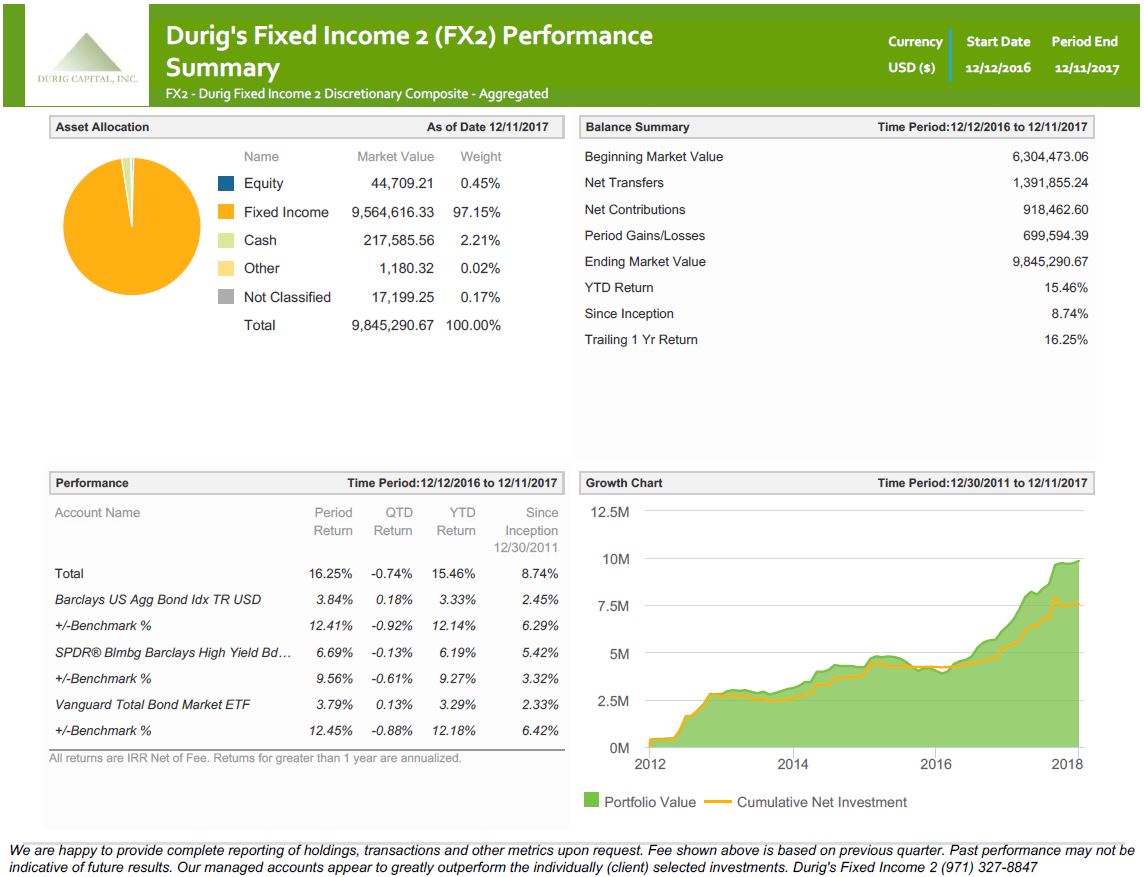 Headquartered in Irving, Texas, CEC Entertainment. Inc. (CEC), was originally incorporated under the name ShowBiz Pizza Place. In 1998, the company changed its name to CEC Entertainment.  CEC is currently majority-owned and controlled by investment funds affiliated with Apollo Global Management, LLC. For more than 35 years, CEC Entertainment has served as the nationally recognized leader in family dining and entertainment. Its brands include Chuck E. Cheese as well as Peter Piper Pizza. As the award-winning, number-one, kid-friendly restaurant for millions of families across the world, the company and its franchisees operate a system of more than 562 venues located in 47 states and 13 foreign countries or territories as of October 1, 2017.

Franchises such as CEC can be very profitable for corporations in that they are very low cost and low risk, while providing the corporation with royalties and portions of revenues.

Since Apollo Global Management acquired CEC in February 2014, its goal has been to increase comparable venue sales, improve profitability and margins and expand CEC venues domestically and internationally.

In addition to these initiatives, CEC has increased its revenue and operating income each year since it was acquired by Apollo.

After almost twenty years, Chuck E. Cheese is renovating. The goal – to make the spaces more inviting to adults as well as kids. These updates include a revamped menu, more muted colors, sleeker furniture and brighter lighting.  And not only is the company updating the interior of the restaurant, but the exterior look as well. Outside, the company will do away with the purple and red awnings and checkerboard paneling as well as the iconic logo of its well-known mascot. In place of these will be softer colors, wood paneling on the sides of the building, more refined signage and an updated logo. In addition to the exterior and interior changes, the company is incorporating an open concept kitchen area to convey good food credibility.  New menu items include BBQ chicken pizza, fresh wraps and sandwiches specifically aimed at parents’ tastes.  This new look will be rolled out in seven locations initially – four in San Antonio and three in Kansas City – so that the company can learn from the revamped locations before rolling out the new look nationwide.

In May 2017, CEC’s owner, Apollo Global Management, was reportedly looking to sell the company and was negotiating with several firms. Since then, the buzz about a possible sale has gone quiet. At the same time, despite the ongoing sale negotiations, an initial public offering (IPO) of CEC Entertainment was still a possibility. And while talk of this has also quieted for the moment, this could still be strategy Apollo uses to spin-off CEC. In fact, in July 2017, CEC Entertainment’s CEO, Tom Leverton told the Dallas Business Journal, “It’s not a permanent situation that we would be private equity-owned”.  An IPO would bring a new influx of cash to CEC, which would provide options to pay down debt, upgrade its restaurants or both.

As noted above, CEC revenues have shown year-over-year improvements from 2014 to 2016. 2017 may prove to be more challenging especially as the company was affected by declines in revenues in Q3 due to Hurricane Irma and Hurricane Harvey. This is reflected in the company’s Q3 revenues, which registered 6.5% lower than Q3 2016.

Interest coverage indicates a company’s ability to service its existing debt. For the nine months ending September 30, 2017, CEC had operating income of $133.0 million (not including non-cash charges of impairments, and depreciation/ amortization). For the same period, the company had interest expense of $51.6 million, for an interest coverage ratio of 2.5x.

CEC also had healthy liquidity levels as of its last reported financial results. As of October 1, 2017, the company had cash and cash equivalents of $79.4 million, with another $140.1 million available on its undrawn revolving credit facility.

The risk for bondholders is whether CEC can continue to transform its brands, mostly its well-known Chuck E. Cheese brand, to appeal to the changing tastes of consumers. The company is taking steps to update its offerings, including transforming the look of its restaurants as well as its menu offerings. Ownership by Apollo Management since 2014 has improved CEC’s revenues and the company continues to selectively expand into markets where it is underrepresented. In light of these considerations, the yield to maturity of 9% on CEC’s 2022 bonds appears to outweigh the risks identified. 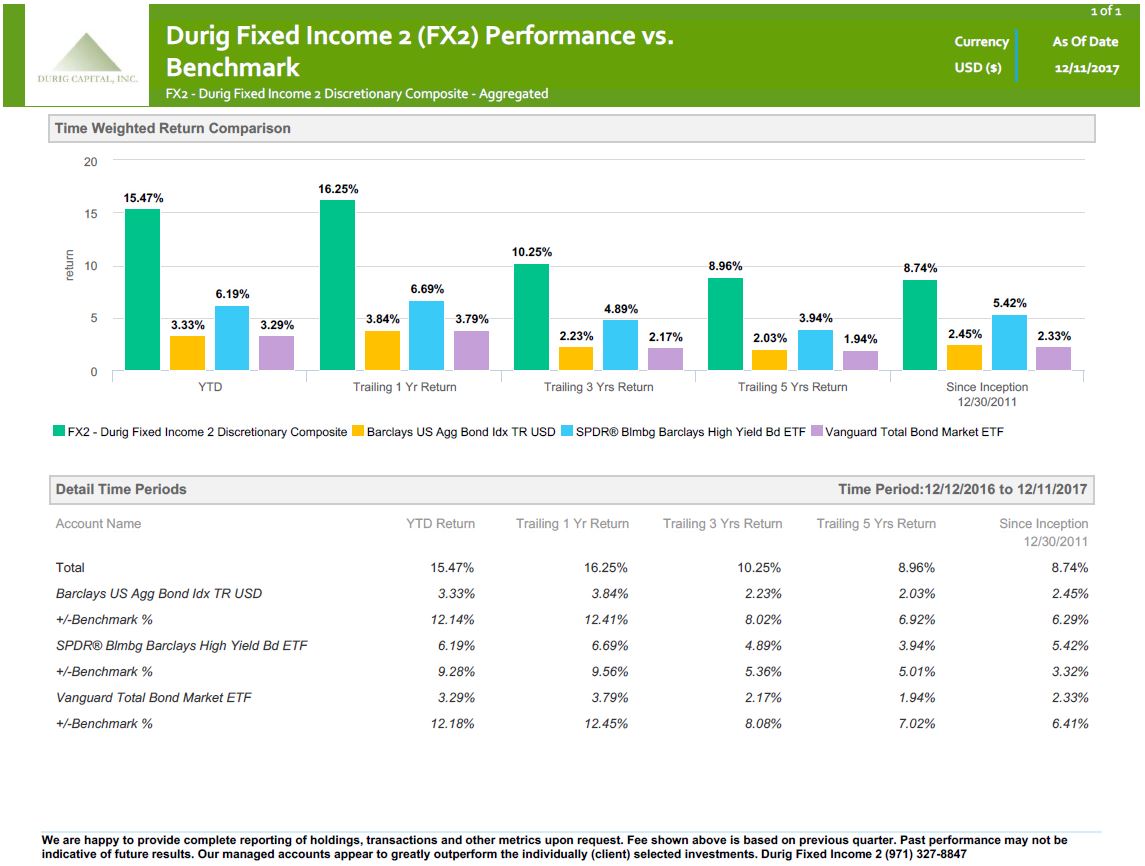 CEC Entertainment has been serving and entertaining families for nearly 40 years. The company is effectively addressing the current challenges of changing consumer tastes as well as updating its branding and image. Under the ownership of Apollo Management, the company has grown steadily. The prospect of a sale or a possible IPO could both be a win for investors depending on the eventual owner and / or the capital raised by an IPO. CEC’s 2022 bonds, couponed at 8.0% and with a yield-to-maturity of 9% make a great addition to an already diversified portfolio such as the Fixed Income 2 (FX2) managed income portfolio, the recent benchmarked and aggregated performance of which is shown above.

At Durig, our skilled team of financial professionals provide investors with specialized portfolio management and transparent fiduciary services at a very low cost. To obtain higher yields and to keep costs as low as possible for our clients, we typically bundle smaller retail orders into larger institutional sized orders with many global trading firms and bond platforms. Our professional service enables access to a greater spectrum of bonds, higher yields, and lower price points.  Most of our client accounts are custodied in their own name at TD Ameritrade Institutional, a large discount service provider that is SPIC insured.

We track thousands of bond issues and their underlying fundamentals for months, sometimes years, before finding any that achieve or surpass the targeted criteria we have found to be successful.  Our main priority is to provide the best opportunities for our clients.  Our bond reviews are published online and distributed through our free email newsletter to thousands of prospective clients and competitive firms only after we have first served the needs of our clients.  Bond selections may not be published if they have very limited availability or liquidity, or are viewed as not being in the best interests of our clients. When high yielding bonds with improving fundamentals are acquired at lower costs, Durig believes that investors will appreciate earning higher yields and incomes with our superior low cost, portfolio management and fiduciary services.

Disclosure: Durig and certain clients may have positions in CEC 2022 bonds.  To receive updates on CEC bonds, please sign up for our Free Bond Newsletter.

Please note that all yield and price indications are shown from the time of our research.  Our reports are never an offer to buy or sell any security.  We are not a broker/dealer, and reports are intended for distribution to our clients. As a result of our institutional association, we frequently obtain better yield/price executions for our clients than is initially indicated in our reports.  We welcome inquiries from other advisors that may also be interested in our work and the possibilities of achieving higher yields for retail clients.