This week, we take our second look at one of only two publicly held leaf tobacco merchants. Alliance One serves large, multinational manufacturers of tobacco products, like Phillip Morris and China National Tobacco. As the company’s 2017 fiscal year ended on March 31, 2017, it has recently posted its financial results for both its Q4 2017 and fiscal year (FY) 2017.  Some of the highlights include:

Although tobacco usage has declined here in the U.S., it continues to be robust in many other regions of the world. Alliance One’s 2021 bonds are currently selling near 87.875, giving the 9.875% coupon an outstanding yield-to-maturity of about 13.9%.  For the investor looking to add or increase their exposure in commodities, this may be an ideal addition to an already diversified portfolio.  Considering Alliance One’s dominant position in the tobacco industry, we have marked these for additional weighting in our  Fixed Income 2 (FX2) managed portfolio.  The most recent performance of our managed FX2 portfolio is shown below.

Alliance One wrapped up its 2017 fiscal year on March 31, 2017, and recently posted its financial results. The company continues to make headway on paying down long-term debt and was also able to increase its margins. As mentioned in our previous review of Alliance One International, the company has made good on its goal to use surplus cash to pay down its long-term debt. During March and April of 2017, Alliance purchased and cancelled $57.1 million of its senior secured notes, leaving a remaining balance of $662.9 million outstanding.

Alliance One is one of only two global publicly held leaf tobacco merchants. It holds a leading position in most major tobacco growing regions in the world, including the principal export markets for flue-cured, burley and oriental tobacco. As a result of this global scale, Alliance is well positioned to provide its product to manufacturers of tobacco products all over the world.

The company has broad geographic processing capabilities, a diversified product offering and an established customer base, which includes all of the major consumer tobacco product manufacturers. Alliance selects, purchases, processes, packs, stores, ships and provides agronomy expertise and financing for growing leaf tobacco. Once processed, Alliance sells its tobacco to multinational manufacturers of cigarettes and other tobacco products, such as Phillip Morris and China National Tobacco.

Management at Alliance is projecting increases in crop sizes in FY 2018 which should translate to increased revenues as well. Alliance has heavy weighting of crops in Brazil, the United States and Tanzania, which in FY 2017, were hardest hit by the recent El Nino weather pattern. This resulted in reduced crop sizes and, in turn, reduced revenues. However, the company has already begun to see recovery, specifically in its Brazil crops, which are approximately 50% larger this year (600 million kilos compared to the previous crop at 410 million kilos). Translated into annual revenue, Alliance is anticipating FY 2018 sales to be in the $1.9 billion to $2.0 billion mark, with adjusted EBITDA in the $165 million to $185 million range. As compared to FY 2017 figures, revenues of $1.9 billion would represent an increase of nearly 11% and adjusted EBITDA of $165 million would represent an increase of nearly 21%.

Most everyone would agree that tobacco use (especially in the form of cigarettes) is declining in the United States. However, this is not the case in all countries. A look around the globe reveals that China and Eastern and Southern Europe consume the most cigarettes per person.

Approximately 5.8 trillion cigarettes were smoked worldwide in 2014 and cigarette consumption is still on the rise. The significant reductions in smoking rates in many developed countries that have installed increasingly tight tobacco control laws have been offset by the growing consumption in a single nation: China. The Chinese market now consumes more cigarettes than all other low- and middle-income countries combined. In addition to cigarettes, consumption of other combustible tobacco products is also on the rise. Since 2000, global consumption of cigarillos has more than doubled, and consumption of roll-your-own tobacco and pipe tobacco both increased by more than a third. One reason for this increase is likely because these other tobacco products are often taxed at lower rates than cigarettes making them more affordable. 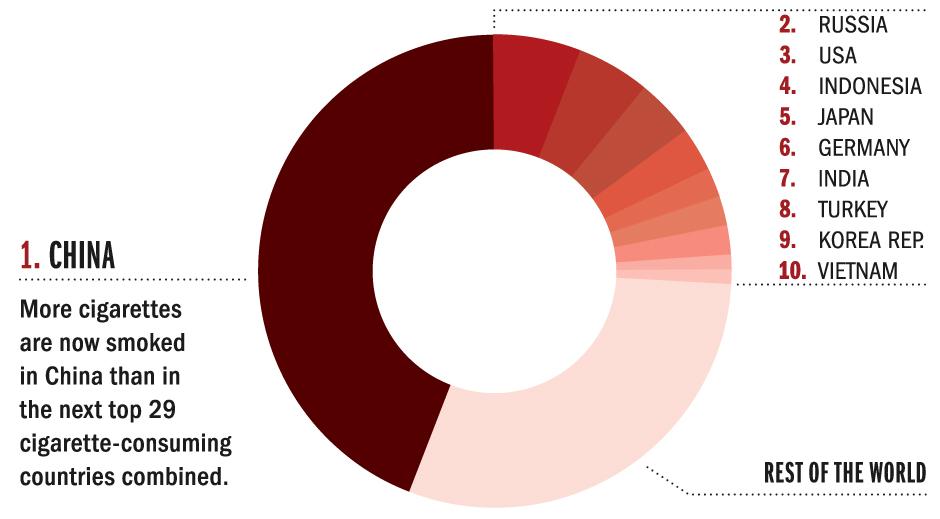 Alliance One’s most recent financials indicate adjusted EBITDA for FY 2017 of $136.6 million and interest expense of $132.7 million for an adjusted EBITDA / interest expense ratio just over 1x. While this coverage amount is lower than other companies we have reviewed, Alliance does appear to have solid prospects for increasing its revenues and profitability in FY 2018 which should translate to increased interest coverage.

Alliance One has excellent liquidity. As of March 31, 2017, the company recorded total liquidity of $852.9 million. This was comprised of $473.1 million in cash and an additional $379.8 million available through the company’s credit lines.

The default risk for bondholders is tied to whether Alliance One can recover from the damage done by El Nino as well as continue to deleverage the balance sheet. The company appears to be off to a good start for this fiscal year, especially with the improvements seen so far in its Brazil crops. And, in its latest earnings call, Joel Thomas, Alliance CFO, reiterated the company’s commitment to the purchase of $25 million to $50 million per year of the company’s more expensive debt by using surplus cash. As crop yields increase and debt levels decrease, these 48-month bonds, with a current yield to maturity of 13.9%, appear to outweigh the risks identified.

E-Cigarettes have been gaining popularity over the past couple years. However, with increasing government regulation being considered, this could have significant effects on this products near-term growth.

Tobacco is commodity whose price fluctuates. In fact, over the past few years, the average sold price per kilogram realized by Alliance One has decreased from $5.15 per kilo in FY 2015 to $4.28 in FY 2017. This has had a pronounced effect on revenues, especially considering that the amount of tobacco leaf sold has increased over that time period, while total revenues actually declined.

The consumer tobacco business is dominated by a relatively small number of large, multinational cigarette manufacturers and government controlled entities. Two of Alliance One’s largest customers are Phillip Morris and China Tobacco. Sales to each of these companies each have made up over 10% of the Alliance One’s total revenues from FY 2014 through FY 2016. An adverse event with either of these customers could have a significant impact on the company’s sales and profitability.

Alliance One may not be as well known as some of the multinational tobacco product manufacturers it sells to – like Phillip Morris or China National Tobacco. However, this tobacco leaf merchant powerhouse has a formidable presence all over the world as one of only two publicly traded tobacco leaf merchants. Even with the effects of El Nino in its most recent year’s results, Alliance was able to increase its margins. Alliance continues to make progress on debt reduction and improving its balance sheet. The company’s 2021 bonds, couponed at 9.875% and with a current yield to maturity of 13.9%, offer high cash flow and are a fantastic way to add commodity diversification to fixed income portfolios.  Therefore we have marked these bonds for additional weighting in our FX2 global high yield income portfolios.

Disclosure: Durig Capital and certain clients may have positions in Alliance One International 2021 bonds.