This week, we take our fourth look at Gran Colombia Gold, the largest underground gold and silver producer in Colombia.  Our first look at this gold producer profiled a company that was newly restructured and looking to explode its production and revenues.  Since our first look in early 2016, Gran Colombia has routinely posted excellent quarterly results and continues to look for opportunities to improve its balance sheet.  Since our last review, the company has posted both full year 2016 and first quarter 2017 results.

Gran Colombia Gold’s unrated convertible 2018 Yankee bonds are couponed at 1%, pay out monthly,  mature on August 11, 2018, and are currently priced about 63.  If considered without its conversion feature, this remarkably low price would indicate an astonishing yield to maturity that’s well over 40%.  However, because of the existing option that the company has to convert 81% of the principle to equity should the stock price remain below the strike price of $ 1.95 (USD) at maturity, this issue merits a different, more intense, look at the company’s overall enterprise valuation should this conversion occur.  For an investor who is prepared to dig deeper, and see a junior gold miner that we believe the inefficient capital markets have overlooked and grossly under priced, these bonds are a rare anomaly that have to potential to eventually score spectacular capital gains.  Therefore, we marked them for additional weighting in our Distressed Debt 1 Hedge Fund, and our FX2 global high yield income portfolios.  The performance of our Distressed Debt 1 Hedge Fund is shown below.

An Update Since Our Last Review

We reviewed Gran Colombia three times in 2016, once in February again in May, and lastly, in October. Since then, the company has posted outstanding results for its full year 2016, demonstrating the value of the restructuring the company underwent early in 2016.

For the full year 2016, Gran Colombia had many positive developments. The company had its best year of gold production since the company was formed, reaching almost 150,000 ounces, with an all-in-cash-cost (AISC) averaging $850 per ounce. There were other outstanding highlights from 2016. 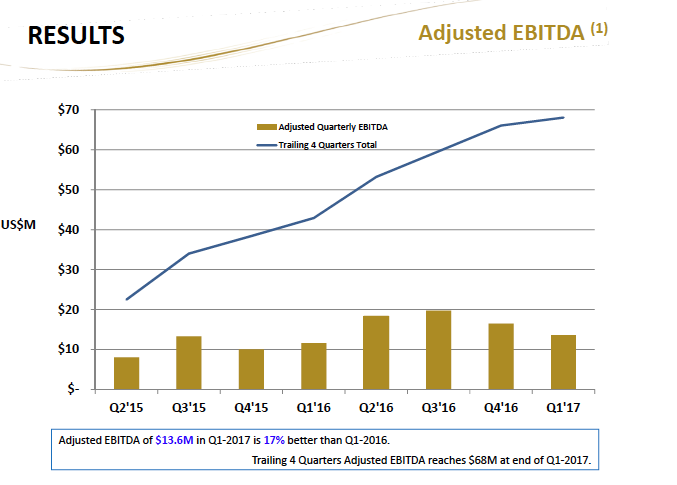 Gran Colombia has stated its goal is to generate excess cash flow in 2017 equal to 10% of the aggregate principal of its senior notes, with the intent of using this cash to make open market repurchases of the notes for cancellation.

Gran Colombia is a Canadian-based gold and silver exploration, development and production company with its primary focus in Colombia. Gran Colombia is currently the largest underground gold and silver producer in Colombia with several underground mines and two processing plants in operation at its Segovia and Marmato Operations. Gran Colombia is currently in the midst of an expansion and modernization project at its high grade, production stage Segovia Operations. In recent years, Gran Colombia has successfully implemented a number of cost savings initiatives, bringing its All-In Sustaining Cost (AISC) to US $850 per ounce in 2016 and expected to be below US900 in 2017.

The second change Gran Colombia made was to solicit bondholders of its 2020 notes to extend the maturity of these notes from 2020 to 2024 in exchange for an increase in bond interest from the current annual rate of 6% to 8% beginning June 30, 2017. Holders of $47.0 million aggregate principal of the 2020 notes consented to extending the maturity of their bonds. This extension gives additional flexibility to Gran Colombia on the timing of principal repayments and / or bond refinancing.

On April 19, 2017, Gran Colombia announced that its measured and indicated resources at its Segovia operations increased to 2.9 million tons at a grade of 12.0 grams per ton totaling 1.1 million ounces of gold, up 174% compared to the mineral resource estimate as of December 31, 2016.

After the share consolidation effective in April 2015, Gran Colombia adjusted the conversion price for these 2018 convertible bonds to $1.95 per share USD (or approximately $2.64 per share CAD as of June 1, 2017 exchange rates). Bondholders should note that at maturity, the 2018 notes may be settled with common stock, as noted in Gran Colombia’s 2018 Amended and Restated Indenture.

While the difficulty of understanding this feature may have discouraged some from taking a position in either the stock or the debentures, it is important to consider what this feature might add to debenture value should the equity market awake to what we believe is a more reasonable valuation for the company relative to many (if not most) its peers.  Considering the conversion factor of the 2018 bonds, one method to calculate the potential value of the company, and in turn its stock, is to use a multiple of EBITDA.  Using 2016 adjusted EBITDA of $66 million, a relatively low EBITDA multiple of 5x would equates to an enterprise value of $330 million.  If all of the outstanding debentures were converted to stock, the fully diluted share count would be about 95.6 million outstanding.  At it’s current market price of about $1.07, the capital markets currently only put the fully diluted market cap for this company (which continues to grow its EBITDA) near a paltry $ 102.3 million, which is less than one-third of what we think a more rational market might value it at, based on its 2016 results.  The company has estimated that it will increase production in 2017, and continue to pay down debt (thus reducing fully diluted share count.)  Although it is difficult to predict the movement and/or value of an individual stock due to the many factors involved, we believe the company is extremely undervalued, and see it’s debentures as the best way to take advantage of what appears to be a market asleep at the wheel relative to this issue.

The default risk for bondholders is Gran Colombia’s ability to continue its solid upward trajectory.  The company’s restructuring in early 2016 has helped boost interest coverage. Gran Colombia has continued to post outstanding quarterly results as well as excellent numbers for its full year 2016 results. Production also continues to increase and the company recently posted a considerable increase in its resources at its Segovia mine. In addition, the company is generating excess cash flow for the last few quarters which will be used to decrease debt. Given these developments, the outstanding 35% yield-to-maturity appears to outweigh the risks identified.

Gran Colombia’s mining assets are all located in Colombia.  Mining in other countries can carry additional risks as the political and economic climates are often very different from our own.  Gran Colombia has endured tensions with local groups who oppose the company’s mining operations, but Gran Colombia continues to work with local and national governments to smooth out local relations where its mining activities are located. Furthermore, the Colombian mining industry continues to pass more favorable mining legislature, such as the recently enacted law allowing large-scale mining companies to claim tax credits on capex for new projects, making the country become increasingly attractive for majors such as IAMGOLD, which signed an option agreement with Gran Colombia Gold for the exploration and potential purchase of the company’s Zancudo Project.

As a majority of the GCM’s revenues are from its sales of silver and gold, the company is exposed to volatility in the prices of these commodities on the open market. Gold prices have risen roughly 9% YTD (as of the end of May). If gold continues to trade at these levels (or even appreciate more), this could definitely benefit Gran Colombia’s revenues and profitability. 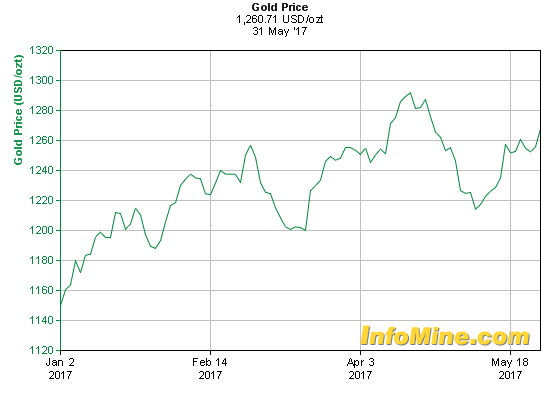 Gran Colombia Gold has come through its restructuring in early 2016 to post outstanding results for its full year 2016, with excellent increases to its gold production and revenues. This momentum has continued into 2017 with the company recently posting another stellar quarter with year-over-year production and adjusted EBITDA increases. The recent changes in capital structure give the company additional flexibility with respect to the timing of repayment or refinancing of its debt. In addition, the recent upgrade of its Segovia resources gives the company increased value. Its convertible short-term 2018 bonds are priced at a deep discount, and trade in close proximity to the equity value of very low value stock in our opinion.  With a current interest coverage ratio of nearly 5x, and virtually no risk of default (due to its convert feature), we have increased portfolio positions in these undervalued bonds in our Fixed-Income2.com and the top performing Distressed Debt 1 Hedge fund.  View the most recent performance of our FX2 portfolio below.

Please note that all yield and price indications are shown from the time of our research. Our reports are never an offer to buy or sell any security. We are not a broker/dealer, and reports are intended for distribution to our clients. As a result of our institutional association, we frequently obtain better yield/price executions for our clients than is initially indicated in our reports. We welcome inquiries from other advisors that may also be interested in our work and the possibilities of achieving higher yields for retail clients.

Sign Up Below to Receive a Free Bond Investment Research Newsletter