This week’s bond review focuses on a company whose revenues are derived from its nitrogen products, which it sells to the agricultural, industrial and mining industries. LSB Industries have recently released their Q1 2017 results. These results show an impressive improvement over the company’s 2016 results.

In addition, the company has made excellent progress on cost and debt reductions, while increasing production efficiencies. The industry as well as company outlook looks extremely positive in terms of demand for LSB’s products. The company’s short 24- month bonds, couponed at 8.50%, have a current yield to worst (YTW) of ~8%. These bonds are an excellent opportunity for investors to add diversification with a pure play chemical company and will make a solid addition to our Fixed Income 2 (FX2) managed income portfolio.  View the most recent aggregate performance of our managed FX2 portfolio below.

LSB Industries recently posted its results for the the three months ending March 31, 2017. These results show a company that is emerging from a challenging 2016 with hopes for continued year-over-year performance improvements for the balance of 2017. Here are a few of the highlights from these results.

Headquartered in Oklahoma City, Oklahoma, LSB Industries was formed in 1968. The company manufactures and distributes nitrogen fertilizer and other nitrogen products across North America. Its customers are cooperatives, independent fertilizer distributors, farmers and industrial users. LSB manufactures products for the Agriculture, Industrial and Mining industries. 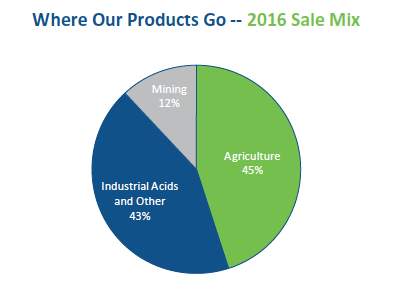 During 2016, LSB actually increased the amount of agricultural products it sold. However, due to drastic declines in the selling prices of these products (anywhere from 29% to 34%), the company’s net sales actually declined. These price decreases were due in part to lower corn prices, lower natural gas prices, as well as the addition of nitrogen production capacity being added globally. In response to this, LSB instituted Sales, General and Administrative (SG&A) expense reductions of approximately $6 million per year that it will begin to realize in 2017. In addition, beginning in 2017, the company has reduced plant costs at each manufacturing facility by approximately $6 million. Considering the three manufacturing facilities as well as the SG&A savings, that totals $24 million in annual savings beginning in 2017.

In addition to the cost reductions instituted by LSB, the company is also working hard to reduce its debt and improve its balance sheet. In October 2016, LSB called debt totaling approximately $107 million (including accrued interest) of the following notes: $50 million of its 12%, 2019 Senior Secured notes as well as $50 million of the company’s 7.75%, 2019 Senior Secured notes. The proceeds for these payments came from the company’s sale in July 2016 of its climate control business. LSB is continuing to identify businesses and assets that do not complement its core business focus as strictly a chemical company. These assets include working interest in the natural gas properties in the Marcellus Shale, its engineered products business, certain pieces of equipment and certain real estate.  LSB intends to sell these non-core assets in the first half of 2017 and anticipates this will generate an additional $15 million to $20 million that it can use to further reduce its outstanding debt.

The on-stream rates of LSB’s facilities affects its production, the absorption of fixed costs of each facility and sales of its products. It is a key operating metric that the company uses to manage its business. Specifically, the company closely monitors the on-stream rates of its ammonia plants as that is the basic product used to produce all of its upgraded products.

In Q2 2016, LSB completed an expansion of its manufacturing facility at El Dorado, Arkansas, adding a new ammonia plant to its existing facility. However, since that time, the plant has experiences unplanned downtime due to various causes. As a result, the average on-stream rate for this plant since becoming operational was only 64%, but http://bond-yields.com/wp-admin/post-new.phphas steadily improved. In Q4 2016, that rate climbed to 73%.

Several factors are contributors to a healthy industry outlook for agricultural chemicals. These include growing populations, developing economies, along with the fact that global grain consumption continues to increase. In addition, North America is a very low cost producer of nitrogen fertilizers, due to the fact that natural gas is a primary feedstock for the production of nitrogen fertilizers and there is ample supply thanks to the large natural gas reserves contained in the shale fields. Ample supply translates to lower natural gas prices and consequently, lower production costs.

LSB management is also predicting a much improved 2017 as compared to 2016 measurements.  Due to increased demand for its agricultural products, the company recently sold through its entire production through the month of May 2017 of urea ammonium nitrate.

The company expects to be at full operating rates for 2017 and it will continue to focus on reducing costs. Also, management believes LSB’s operational cash flow will more than cover its capital spending needs and interest cost. In addition, any excess funds generated by non-core asset sales will likely go towards further de-levering the balance sheet.

The default risk is tied to LSB’s ability to continue its improved trajectory begun in Q1 to the rest of 2017 and beyond. The fact that the company sold through all of its urea ammonium nitrate production through the month of May a month early (in April) is a good indication of demand for its products. In addition, the increased efficiencies of its three manufacturing facilities is encouraging as well. Finally, the estimated $24 million in annual savings from company wide cost reductions should add nicely to the bottom line beginning this year. The current yield-to-worst of ~8% on the company’s 2019 bonds appears to outweigh the risks presented here.

As one of the main feedstocks for LSB’s fertilizer products is natural gas, the company is exposed to price fluctuations in the natural gas market. If natural gas prices increase significantly, this would increase its production costs and would have an effect on the profitability of its product sales.

One of the 2017 initiatives identified by LSB management was to evaluate strategic alternatives for its business. These alternatives may include a sale, merger with another party of another strategic transaction involving some or all of the company’s assets. In its last earnings call, Dan Greenwell, LSB’s President and CEO indicated that this process is ongoing and there will be no update on the process until the Board completes its review and approves a definitive course of action or concludes the review process.

LSB Industries posted excellent results in Q1, beginning what appears to be a new trajectory for 2017, a marked improvement over its 2016 results. It has done a fantastic job bringing down production costs, as well as reducing debt / improving its balance sheet through the use of non- core asset sales. The company has healthy liquidity levels and is improving its efficiency levels at all three of its company owned production facilities. The industry and company outlook for 2017 and beyond looks extremely positive which should contribute to improved results this year for LSB. The company’s 2019 bonds, couponed at 8.5% and with a current yield-to-worst of ~8% provides an excellent diversification opportunity for income investors and will make an excellent addition to our FX2 managed income portfolio.

View our many other research articles on Bond-Yields.com

Disclosure: Durig Capital and certain clients may have positions in LSB Industries 2019 bonds.

Warm up with 11% YTM with Ferrellgas, Bonds Mature June 2020