For this week’s bond review, we look to to the retail industry to focus on the largest specialty retailer of men’s suits in the U.S. and Canada.  Men’s Wearhouse (a part of the holding company, Tailored Brands) recently posted excellent third quarter results for the three months ending October 29, 2016.

Today in the U.S. and Canada, there are approximately 110 million men ages 18 to 65. Of these, 30 million are currently members of one of Tailored Brands loyalty programs – around 27% or nearly 1 in 4. For a retail chain, that is an impressive statistic. This speaks to the strength and familiarity of the Men’s Wearhouse / Tailored Brands name. The company’s 2022 bonds, couponed at 7.0% and currently yielding 8% have been steadily increasing in value, but are still trading at a slight discount. Income investors interested in these bonds can add diversification into the retail industry to their portfolio, while also adding a very competitive yield. As such, we have marked these bonds for addition to both our FX1 and FX2 income portfolios.

Men’s Wearhouse recently reported fantastic results for its fiscal year third quarter (Q3) for the three months ended October 29, 2016.  Here are some of the highlights:

In addition to these outstanding quarterly results, Men’s Wearhouse / Tailored Brands stock has registered impressive growth over the past year as shown here.

Men’s Wearhouse (under the holding company Tailored Brands, NYSE: TLRD) is the largest specialty retailer of men’s suits and the largest provider of apparel rental product in the U.S. and Canada with 1,710 stores including tuxedo shops within Macy’s stores. The company conducts its retail segment as a specialty apparel retailer offering suits, suit separates, sport coats, slacks, dress and casual shirts, shoes and accessories, primarily for men. Men’s Wearhouse offers its products and services through multiple brands including The Men’s Wearhouse/Men’s Wearhouse and Tux (“Men’s Wearhouse”), Jos. A. Bank, Moores Clothing for Men (“Moores”), K&G and Joseph Abboud and through multiple channels including physical stores as well as online and through its call center. Stores are located throughout the United States, Puerto Rico and Canada and carry a wide selection of exclusive and non-exclusive merchandise brands. Tuxedo and suit rentals are offered at our Men’s Wearhouse, Jos. A. Bank and Moores retail stores and our tuxedo shops within Macy’s stores. In addition, the company offers its customers alteration services.

In early 2014, Men’s Wearhouse acquired Jos. A Banks, a rival men’s suit retailer. Most of the company’s debt can be related back to that acquisition. However, during 2016, Tailored Brands made a concerted effort to improve its balance sheet by reducing debt. During the company’s third quarter, the company repurchased and retired $18.5 million of its senior notes resulting in a total of $25 million of its senior notes being retired during 2016. In the company’s most recent earnings call, management did indicate that for the near future, all free cash flow (other than capital expenditures and dividends) would be directed toward debt reduction.

In addition to reducing its debt, Tailored Brands has also made excellent progress on its cost reduction initiatives in 2016. At the beginning of 2016, the company set a goal to reduce costs by $50 million annually. During its third quarter, the company reduced costs by $17 million, bringing the year-to-date savings to $29 million and on track to achieve the full $50 million goal by fiscal year end. In addition, management expects the savings trend to continue into 2017, building to a total annualized savings of $85 million. Most of these savings will likely come from the consolidation of stores, as the company had closed 187 stores as of the end of third quarter, with projection to close a total of 250 stores during fiscal year 2016.

After the acquisition of Jos. A Banks, Tailored Brands needed to make adjustments for the changing consumer for the Jos. A Banks. Jos. A Banks made its mark in the men’s suit retailing space by offering continual promotions, such as buy a suit, get one (or more) free. Tailored Brands management has spent the past few years effecting change and refining the brand image throughout the consolidated Men’s Warehouse / Jos. A Banks retail operation by closing outlet stores and focusing on stores that produce more sales per square foot. In addition, Tailored Brands has partnered with Macy’s department stores and will be opening 300 new Tuxedo Rental Stores inside Macy’s by the end of 2017. The Tuxedo Rental stores are replacing the current freestanding Men’s Wearhouse rental services.  One encouraging statistic shared on the last earnings call with Tailored Brands: currently, there are approximately 110 million men, ages 18-65 in the United States and Canada, of which 30 million are members of one of Tailored Brands loyalty programs. Put another way, nearly one in four men, ages 18-65 are members of one of the loyalty buying programs at Tailored Brands retail stores. This level of customer loyalty could be what keeps Men’s Wearhouse ahead of its competition. 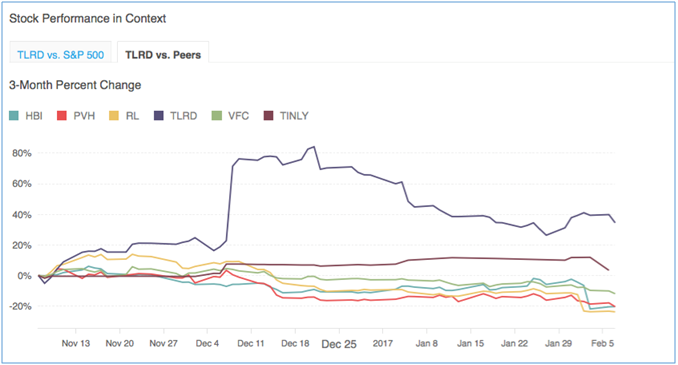 The risk is Tailored Brands ability to perform. The company has done a fantastic job of reducing its ongoing costs as well as making a concentrated effort in 2016 to also reduce the amount of debt on its balance sheet. Its third quarter results were outstanding, especially given that the company is still in the midst of integrating and refining the Jos. A Banks brand to blend seamlessly with its Men’s Wearhouse offering. With the projected annual cost savings increasing in 2017 to $85 million annually as well as the company committing to additional debt repayments, it appears that Tailored Brands is well-positioned to realize the synergies it sought with the Jos. A Banks acquisition. In light of this, the 8% yields on these 65-month bonds appear to outweigh the risks identified.

These bonds have similar yields and duration’s to other bond issues reviewed on Bond-Yields.com, such as the 7.25% Iconix Brand Group and 12% Bristow Group bonds.

In the men’s suit retailing space, Men’s Wearhouse is the clear leader of the pack. In addition, the company is also the largest provider of rental attire (formal and wedding wear) in the country.  In order to build on this platform, the company has added the Jos. A Banks brand. While there have been adjustments to integrate the the Men’s Wearhouse and Jos. A Banks brands, Tailored Brands has made significant strides in this area over the past twelve months. In addition, it has cut costs and debt and looks to refine its remaining stores into higher sales per square foot.  While the 8% yields on these 65-month bonds is less than some of our other recently reviewed bond issues, it still dwarfs the still minimal U.S. five-year treasury yield of 1.94%. These bonds represent an excellent opportunity to diversify into the retail goods industry and  are marked for addition to our Fixed-Income1.com and Fixed-Income2.com global high yield income portfolios.

At Durig Capital, we provide investors with a specialized, transparent fiduciary service at a very low cost. To obtain higher yields and keep costs as low as possible, we typically bundle smaller retail orders into larger institutional sized orders with many global trading firms and bond platforms.  Our professional service enables access to a greater spectrum of bonds, higher yields, and lower price points.  Most of our client accounts custodian in their own name at TD Ameritrade Institutional, a large discount service provider that is SPIC insured, or at Interactive Brokers.

We track thousands of bond issues and their underlying fundamentals for months, sometimes years, before finding any that achieve or surpass the targeted criteria we have found to be successful.  Our main priority is to provide the best opportunities for our clients.  Our bond reviews are published on the Internet and distributed through our free email newsletter to thousands of prospective clients and competitive firms only after we have first served the needs of our clients.  Bond selections may not be published if they have very limited availability or liquidity, or viewed as not being in the best interests of our clients. When high yielding bonds with improving fundamentals are acquired at lower costs, Durig Capital believes that investors will appreciate earning higher incomes with our superior high income, low cost, fiduciary services.

Tell us what your looking for, or if you have questions about US Dollar bond.

Disclosure: Durig Capital and certain clients may have positions in The Men’s Warehouse 2022 bonds.

Please note that all yield and price indications are shown from the time of our research. Our reports are never an offer to buy or sell any security. We are not a broker/dealer, and reports are intended for distribution to our clients.  As a result of our institutional association, we frequently obtain better yield/price executions for our clients than is initially indicated in our reports.  We welcome inquiries from other advisors that may also be interested in our work and the possibilities of achieving higher yields for retail clients.