While some may view the company’s asset sales as a negative, Community Health Systems is carefully choosing which assets to sell, focusing on those that do not reflect the company’s strengths and core businesses. CYH’s 2022 notes, couponed at 6.875%, are currently selling at a discount giving them a yield to maturity of about 9.5%. Healthcare is a non-cyclical industry – it is constant and consistent- and it is a growing need in this country. For investors looking for additional diversification in their portfolios, these 55-month bonds are an excellent complement to more cyclical industries such as commodities, housing, or retail. As such, they make an excellent addition to our Fixed-Income2.com (FX2) global fixed income portfolio.  The most recent performance of our managed FX2 portfolio is shown below.

Beginning in the second quarter of 2016, Community Health Systems (CYH) has systematically reduced the number of hospitals in its portfolio. The company’s ultimate goal is to use the proceeds from these assets sales to deleverage the balance sheet. The assets selected for sale are generally not in one of the company’s strategic beneficial service areas, have lower operating margins and are less complementary to CYH’s business strategy.  This realignment of assets began with the spin-off of 38 hospitals and Quorum Health Resources, a subsidiary of CYH, into Quorum Health Corporation. Since that time, CYH has continued the divestiture of select hospitals from its portfolio.  In 2017, the company anticipates completing the sale of 30 hospitals, consisting of ten different transactions. These hospitals generated approximately $3.4 billion of net revenues in 2016 with mid-single digit Adjusted EBITDA margins. CYH estimates these transactions will generate approximately $2.0 billion in proceeds, which it intends to use to reduce debt. This slide from the company’s most recent earnings call presentation shows the progress of divestitures. 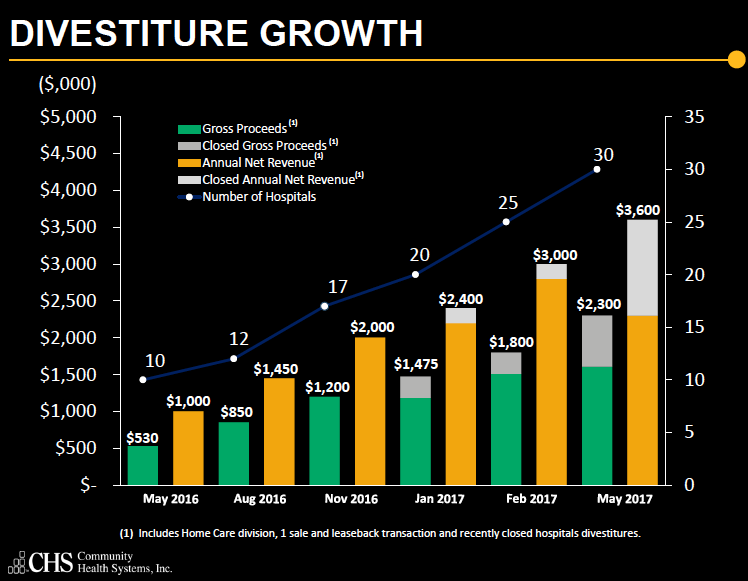 Community Health Systems (NYSE: CYH) is one of the largest publicly traded hospital companies in the United States and a leading operator of general acute care hospitals and outpatient facilities in communities across the country. The company provides healthcare services through the hospitals that it owns and operates and affiliated businesses in non-urban and selected urban markets throughout the United States. It generates revenues by providing a broad range of general and specialized hospital healthcare services and outpatient services to patients in the communities in which it is located. CYH currently owns or leases 137 hospitals in 21 states across the nation. The company generates revenues through the payments it receives for its services to its patients. These payments come from governmental agencies (Medicare and Medicaid) private insurers, and directly from the patients served.

Unlike many industries, such as oil and gas, retail, and housing, healthcare is not cyclical.  There are always individuals needing and seeking out care for sickness or injury.  In 2014, U.S. health care spending grew 5.3%, reaching $3.0 trillion or $9,523 per person.  As a share of U.S. Gross Domestic Product, health spending accounted for 17.5%. While there is much debate about why the U.S. spends so much money on health care, virtually no one would argue that the need is constant and growing.

The aging baby boomer generation (those individuals born between 1946 and 1964) currently makes up between 20% to nearly 25% of the total U.S. population according to various estimates. And according to the U.S. Census Bureau, individuals aged 65 and older in the United States comprise the fastest growing segment of the population, with nearly 50 million people currently aged 65 and over living in the U.S. This segment is expected to grow to more than 63.5 million by 2025 and by 2030, those aged 65+ are expected to grow to over 71 million individuals. This represents a 42% increase in the 65-and-older segment of the population over the next 13 years. As a result, over time, the number of patients and the volume of hospital admissions are expected to grow.  The aging population and increasing life expectancy are driving increased demand for health care services.

The second demographic that is driving healthcare is the increase in obesity among the U.S. population. The U.S. population is getting heavier. The latest statistics from 2016 indicate that overall, 38% of the American population is medically obese as reported by the Center for Disease Control and Prevention. With obesity comes the increased risk for many health conditions including but not limited to heart disease, high blood pressure, diabetes, joint problems, and increased risk for certain types of cancer. 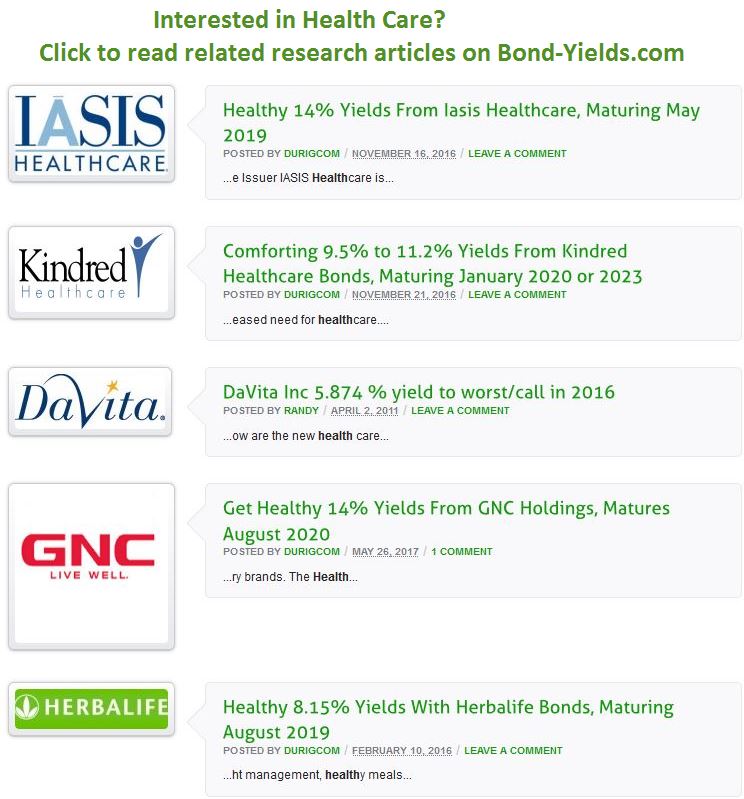 The default risk for bondholders is whether CYH can deleverage sufficiently while maintaining revenues and profitability. The company has been aggressively reducing the number of hospitals in its portfolio. In 2016, the company went from 194 hospitals to 155 hospitals, a 20% reduction. With the planned reductions for this year, this should generate approximately $2.0 billion which can be used to improve the balance sheet.  Another good sign for bondholders is the fact that CYH was recently able to issue new 2023 notes in the amount of $2.2 billion (with an additional tack-on offering of $900 M) in order to pay off its 2018 notes. This would seem to indicate the investment community’s comfort level with the potential revenues and deleveraging of CYH.  Considering the company’s healthy interest coverage and the success of its deleveraging strategy to date, the ~9.5% yield-to-maturity on CYH’s 2022 bonds appears to outweigh the risks identified.

Another development that could affect the future revenues of CYH are the recent discussions in the U.S. Congress about the repeal or at least significant changes in the Affordable Care Act. CYH has significant amounts of revenues (about 1/3 of total revenues) that come from the Medicare and Medicaid programs, as noted in the following graphic. Changes in the amounts and frequencies of payments for patients who utilize these programs for medical insurance could have an adverse effect on CYH’s ongoing revenues. 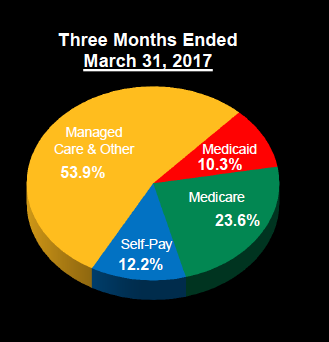 There are many cyclical industries that make up our economy – oil and gas, construction, and retail, just to name a few. However, healthcare is constant and consistent. With the aging Baby Boomer generation, and the increasing obesity epidemic in this country, the need for healthcare will only increase. Although Community Health Systems’ high leverage has necessitated selected asset sales, the company’s core assets being retained reflect the company’s strengths. CYH currently has healthy interest coverage and liquidity, and was able to recently issue new notes to repay its 2018 notes, so the banks appear open to working with CYH as they improve the balance sheet. CYH’s 2022 bonds, maturing in 55 months and with a current yield-to-maturity of about ~9.5%, represent an excellent diversification opportunity and will make an outstanding addition to our FX2 managed portfolio.

Click here to view our many other research articles on Bond-Yields.com