Universal Insurance has $9.61 of cash and investments per share after removing the debt. That is greater than the entire enterprise value of the company which has a $4.90 per share value.  They earned $0.36 a share in the third quarter 2010 and $0.80 for the last nine months.  For the nine-month period ended in September 2010, cash flow provided by operating activities was $131.8 million or $3.36 per share.  The cash flow return on equity is 69% in just a 9 month period.  Annualized the cash flow from operations and it would work out to be about $175 million or $4.46 per share.  It appears that the high levels of cash are camouflaging the true earning power of the company.

Net premiums earned increased 49.1% in the third quarter of 2010 compared to the same quarter in 2009. They earned $0.36 per share in this third quarter compared to $0.28 during the same period of 2009. This works out to be a 28% increase in profits.  Part of the increase in net premiums earned was due to Florida allowing most insurance companies to increase rates, including Universal14.6%, which took effect starting in December of 2009.  Even though the earnings and cash flow are great, we believe Universal earned a higher level of valuation based on current cash flow and earnings.  We believe this level of profit could be sustained but growth could slow.

The Insurance Property Casualty peer groups trade about 8.11 times cash flow.  Applying this metric would value Universal at about $44.23 per share plus $9.51 cash thus creating a market value of $53.70 per share.

The $0.80 per share earned during the last 9 months gives them a PE of 6.05 and if you annualized that performance it would provide a PE of just above 4.54.  The last four quarters of operational cash flow generated over a 92% return on the market value. That is an amazing high return considering current 10 year treasuries are yielding about 3.25%. The 92% return of operational cash flow on the market value is close to our find with Adams Resources (AE) which is up strongly since our Investment with Income review of the company. Universals is even better considering that Adams 100% return of cash flow was from the enterprise (subtracting the cash) while Universal is based on market value which includes cash.

Applying the Insurance Property Casualty peer cash flow to Universal would bring the value to $19.05 plus the $9.61 cash or $28.66 per share.

The price to enterprise sales ratio is negative per share. This again is very rare and only occurs when companies have more cash then the entire enterprise is worth.

Possibly the most surprising thing about Universal is even though, on most metrics, they are undervalued to their peers, they are making almost double the industry average with respect to gross profit margins.

Universal generated about $175 million on an annual run rate base on their first three quarters. That works out $4.64 per share.  Realizing the value of the entire enterprise is negative and the entire company is valued at only $4.84 per share with annual operational cash approaching the company’s value, this makes for extremely rare value.  With $0.30 dividend per share paid to year to date, Universal has paid out only 6.4 % of the operational cash flow to shareholders. 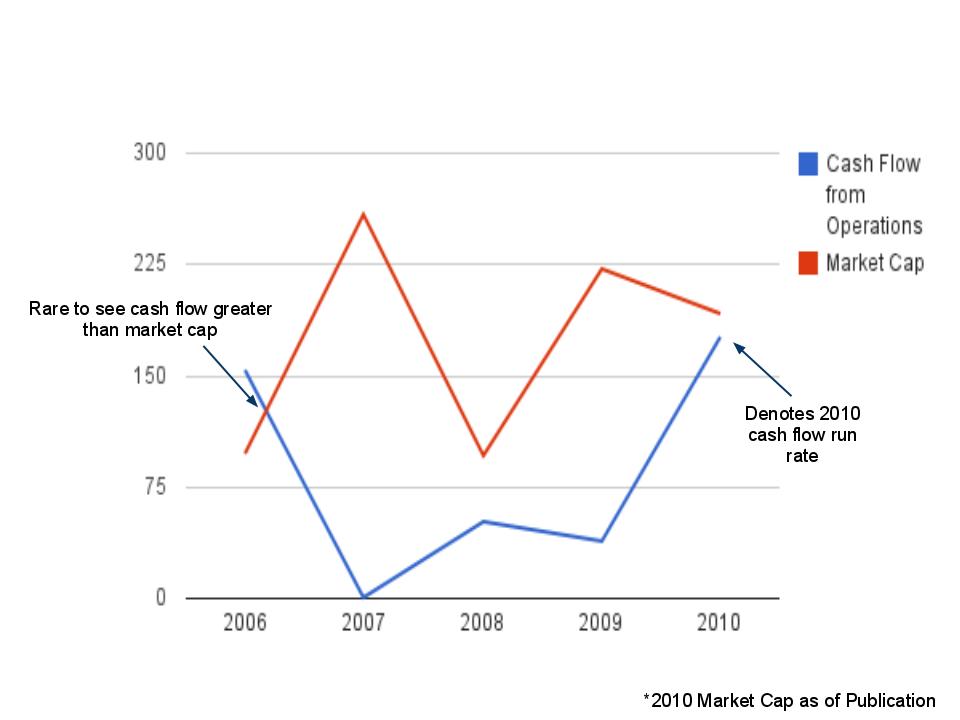 In my opinion, the high level of cash is hiding the outstanding free cash flow generation from operations coupled with the many problems associated with the Florida property and casualty market. We believe they are in a position for a substantial dividend increase.  Backing this theory up is the fact that the dividend payout ratio is only 6% of free cash flow.

Since the insiders own 46% of the outstanding shares, they also have personal motives to significantly increase the payout ratio knowing this would greatly increase managements (their) personal cash flow.

Even though profits and cash flow are up considerably since 2009, the payout has been much lower.

Universal in many ways remind us Homeowners Choice (HCII) which is a property casualty also in Florida, and since our article tilted “Has the stock market miss-priced HCII?” the stock has moved up significantly and they declared a new dividend (up to $0.60 per share) thus possibly making the current yield even higher then Universal Insurance.  Both have seen their core market of Florida property and causality rates increase so significantly that it has help greatly improve earning, cash flow and values of these two companies.  We now believe that Universal is demonstrating a better value than Homeowners Choice when we publicized our above article.  Maybe that’s why Homeowners Choice made an offer to buy Universal in 2009.
Assuming they maintain the $0.30 dividend payout per share, the yield would be 6.1% based on a share price of $4.84.  Since they could possibly keep their four quarterly payments, meaning they pay one more in 2010 as they did in 2008 and 2009, the yield would be in the 8% range. Since they have over $9 of cash and investments per share and the cash is concealing their real earnings power, for illustrative purposes only, let say they increase their payout to $0.40 or only 17% of their yearly operation cash flow. This shows that a 33% dividend increase would not greatly affect cash flow.

The stock is currently trading with at 6.1% yield or about twice the 10 year US Treasury. In my option, that is without a dividends increase, just based on Universal history of growth, the current yield should be below the 10 year treasury yield.

Looking at the chart above:

Florida due to hurricanes is a high risk state:

In 2004 and 2005 Florida received three hurricanes that ranked in the top 11 Worst Hurricanes by SunSentianal.com.  With the size and close occurrence of all three, they radically changed the perceived risk and political environment in which Florida property casualty market has been viewed.  Their will be another hurricanes in Florida and companies should be priced as if one occurs.  Having three of the largest over a 100 year lifespan in only two seasons made most companies and investors shy away from this business.  With the greater perceived risks that were made apparent with the 2004 and 2005 hurricane seasons, the stock hit $9.11 in 2007 while the cash and cash flow were much lower compared to current measures.

The company currently has $22.5 million dollar of risk, according to SEC filings, to the first major hurricane.  The rest of the $1.8 billion has reinsurance coverage and the risks spread throughout the state. With the annual cash flow close to $175 million dollars and the cash and investment currently at $398 million, $22.5 million is a low risk to solvency.  We believe a much higher financial solvency risk could be built in and the stock should still trade higher. With that said, the 2010 hurricane season has ended and the hurricane risk should not become apparent for about another 6 months.

Since the 2004-2005 hurricane seasons, the state of Florida has greatly increased their regularly burden. This has not become more burdensome to the industry but rather an improvement.  Floridians are now mandated to have Property and Casualty insurance when buying a home in Florida.

Insiders control 46% of the shares outstanding.  Having almost half of the company owned by insiders illustrates to the outside investor that the very people operating the company think it is a strong investment for their personal wealth.  Although insider ownerships is a positive indicator for the outsider, the insiders have been net sellers of stock over the last three months. It has been announced they have intentions to sell up to 4.5 million share or about 11% of the outstanding company. This sale is materially lowering the personal wealth of President and Chief Executive Officer Bradley I. Meier has invested in the company and may be an indication of possible less interest.   In the past, Universal has seen several buyout offers although nothing came to fruition.   If Mr. Meier is seeking to “retire,” which the large selling of stock could be a signal of showing less financial interest in the company, then we believe based on Universals cash, negative equity, cash flow, and overall low value, Universal could, even in this market, could attract a robust bidding war.

The company’s top official has repeatedly lowered their financial wealth involved in the company by liquidating their stock options instead of sharing in the long term goals of investors. Universal’s inside ownership is better than most companies and with this sale might be similar to our review of China Yuchai International (CYD), a company that has 33% insiders ownership and demonstrated few insiders selling at great returns just after our published review.

Cash on the books:

Their investment appear to be heavily focuses in commodities, ETF and commodity based stocks making them in many ways riskier than many corporate portfolios we’ve reviewed. As nice as their returns have been, could potentially benefit from professional help.

Their large cash balance, representing about ⅔ of the entire equity value,  is only earning minimal bank investment returns.  If they earned a 3% higher return on their cash, it would work out to be an additional $0.30 per share on a pretax basis.

There is no known dividend policy. There are no publicized guidelines or policies. It is very unclear if or when dividends will be paid. This year they have paid three dividends while in the last two years they paid four. We contacted the company and ask for some true guidance to help our clients better understand the expected cash flow and again they confirmed all dividends being paid were based  “only to the board of directors discretion” meaning there is no guidance. This lack of guidance, or even a tangible outline, is a major issue hurting the value and should be addressed by the company.

We believe that Universal is trading at about an 80%+ discount to many of their peers and well below most companies in the in the Insurance Property casualty market. In our carriers as investment professionals, we can’t remember reviewing a company that is trading so close to it current operational cash flow and far below cash and investment balances. Universal core business appears to be gaining strength, even in the last year when the economic growth was muted. Based on profits, cash flow, the negative enterprise value and buy out value, the company should be valued significantly higher.

Universal is in a strong financial position to even increase it current high yield even with the current dividend yield above benchmark bonds.  Knowing that the core operations are very profitable and a repeatable required service, the total investment of cash, profits and cash flow appear so compelling we’ve placed it as a core position in our Investment Growth & Income Portfolio.

Disclosure: Durig Capital and its clients currently do have positions in Universal Insurance Holdings.

Adams Resources for Investment with Income.

The 4th Quarter of 2010: Investment with Income