This week’s Durig Fixed Income 2 (FX2)  review is our third look at an oil and gas producer focused in the Gulf of Mexico. We first reviewed W&T Offshore in November 2016 and again in April 2017.  W&T Offshore has done a remarkable job of maintaining production even with minimal capital expenditures. With oil and gas prices on the rise, the company is starting to post excellent evidence that it is back in growth mode after a long slumber. Its most recent quarterly results should excite investors:

For bondholders, the company’s current liquidity level of $255 million should be noted. This amount would more than pay off the current outstanding balance of these 2019 notes of approximately $190 million. In fact, W&T’s CEO, Tracy Krohn, plainly stated management’s intention to pay off these notes at maturity. In light of these developments, and the bond’s current yield-to-maturity of over 25%, these are ideal bonds for additional weighting in our Distressed Debt 1 LP Hedge Fund, as well as our Fixed Income 2 (FX2) High-Yield managed income portfolio.  The most recent performance of our managed FX2 portfolio is shown below.

W&T posted outstanding results for its most recent quarter. For the three months ending June 30, 2017, revenues were up 24% year-over-year, coming in at $123.7 million. This wasn’t the only financial metric that improved. There were several others:

Most impressive is the company’s liquidity level, especially considering the upcoming maturity of these short-term 2019 bonds. Currently, the outstanding balance of the 2019 notes is approximately $190 million. As of July 26, 2017, W&T had total liquidity of $255 million that included $105 million in cash and the balance from its credit line. In the company’s earnings call, CEO Tracy Krohn indicated the company’s intention to pay these off in cash at maturity rather than roll these over. With cash flow from the first six months at $65 million, the company has more than enough time to accrue the amount needed to pay off the bonds, or use a portion of its revolving credit line.

Founded in 1983, W&T is an independent oil and natural gas acquisition, exploitation and exploration company, with a focus primarily in the deep waters of the Gulf of Mexico. The company’s founder and CEO, Tracy Krohn, has been leading W&T for the past 31 years. It has developed significant technical expertise and has successfully discovered and produced properties on the conventional shelf and in the deepwater across the Gulf of Mexico. The company owns working interests in 54 fields in federal and state waters and have interests in leases covering approximately 750,000 gross acres. In 2015, W&T sold the West Texas Permian Basin properties that had been acquired in 2011.  W&T began trading on the NYSE under the ticker symbol “WTI” in 2005.

In a recent earnings call, company Chairman and CEO, Tracy Krohn, talked at length about the company’s assets in the Gulf of Mexico, specifically the low decline rate of the wells in the Gulf of Mexico as compared to an onshore well in one of pervasive shale plays located around the U.S. The point of his comments is best illustrated by one of the slides from the accompanying presentation. 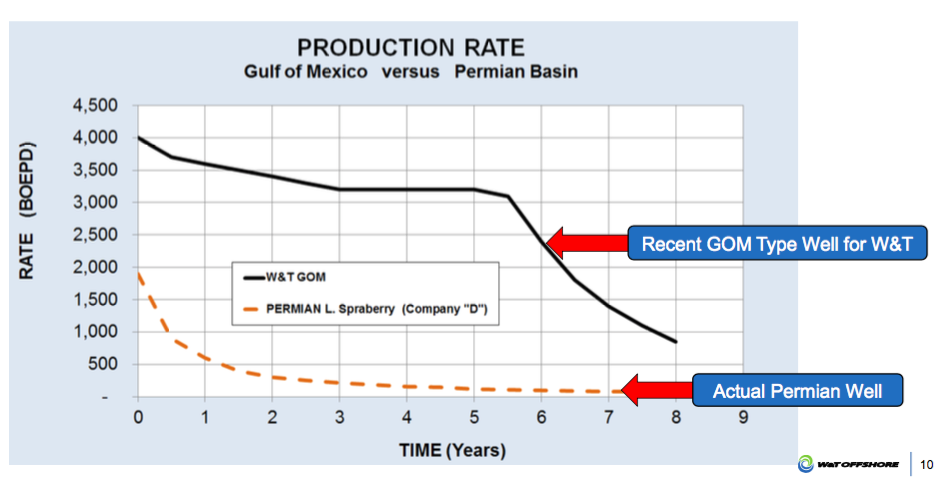 As is evidenced here, the production decline in the Gulf of Mexico well in the early years of production is much shallower than the well located in the shale play. This shallow decline curve represents many of W&T’s projects and directly contributes to the company’s ability to maintain steady production with very little capital expenditure (capex). This has been a significant factor in the company’s ability to maintain relatively stable production while maintaining a small capex budget. W&T’s abilities in producing in the offshore environment is a distinguishing feature that sets the company apart from many of its onshore competitors. Furthermore, these low-decline assets are much more valuable than traditional onshore wells and can be a positive element if W&T looks to leverage these in the future.

Coupled with its ability to maintain its production, W&T has continued to hammer away at expense reductions. We referenced this in our last review of W&T and the company has continued to whittle down its operating expenses. In its latest quarterly results, the company again showed its commitment keeping costs low. Lease Operating Expenses (LOE) were down $5.1 million or 14% over Q2 2016, and LOE were down 22% over Q1 2017 levels. Between 2013 and 2016, W&T reduced total operating expenses by 30%, from $19.61 per barrel to $13.81 per barrel by the end of 2016.

W&T’s continued vigilance in respect to its expenses, has translated nicely to increasing margins. At the height of oil’s price appreciation a few years ago (when oil was above $100 / barrel) W&T had adjusted EBITDA margins from 60% to 62%. In 2015, amidst the dramatic price decreases, that level dropped to 46%. Thanks to the company’s insistence on cost controls, margins are recovering. In Q1, the adjusted EBITDA margin was 52%. In Q2, it continued its climb, coming in at 59%. 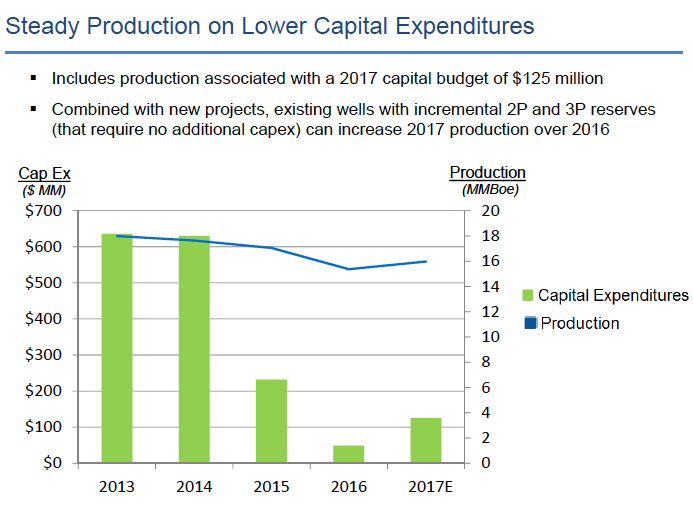 Interest coverage is of primary importance for bondholders as it indicates a company’s ability to service its debt. For its most recent quarter, W&T had operating income of $32.9 million and interest expense of $11.4 million. This gives the company interest coverage of nearly 3x (2.9x). This is superb coverage especially considering these bonds have a current yield-to-maturity of over 25%. 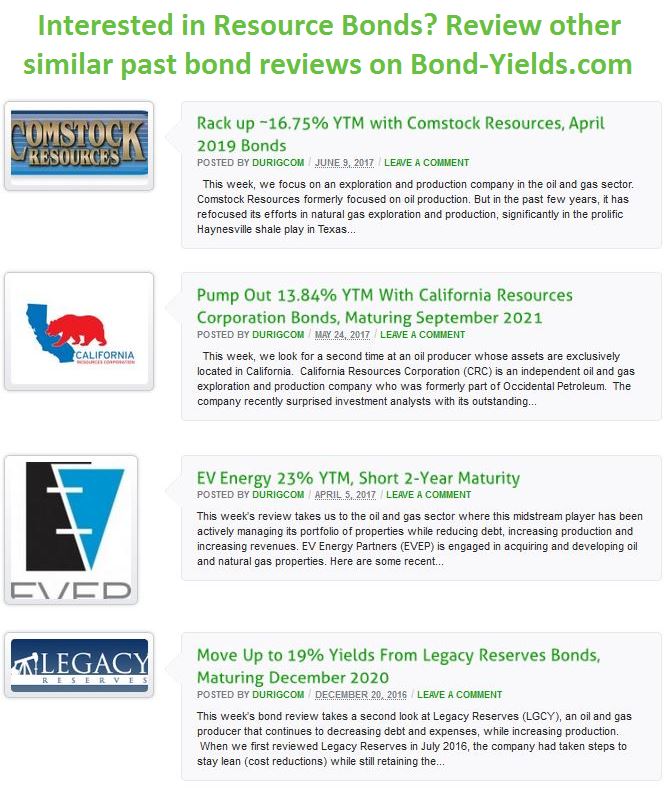 The risk for bondholders is W&T’s ability to continue to build revenue and profits over the next 22 months. Perhaps the most impressive fact is the company’s current liquidity, coupled with its potential cash generation over the next 12 to 18 months as well as management’s stated intention to pay off these notes in cash. In addition to this, W&T is in a fantastic position to take advantage of its low-decay assets with oil and gas prices recovering from their historic lows. All of the company’s financial metrics were excellent in its most recent quarter and the company expects production and revenues to increase this year. In light of these considerations, the over 25% yield-to-maturity on these short 22 month bonds appears to outweigh the risks identified.

Since W&T’s revenues come directly from the sale of the oil and gas it produces, it is exposed to the volatility in the commodities markets. Both oil and natural gas have seen appreciation in price over the past year. However, it is difficult to predict where prices will go next. Another significant and prolonged decrease in commodities pricing could have an unfavorable impact on W&T’s revenues and profitability.

In June, a U.S District court ordered W&T to pay Apache Corporation $43.2 million plus court costs for a lawsuit filed in December 2014. The company intends to appeal the ruling, but has deposited $49.5 million with the court in order to stay execution of the judgment. There is no guarantee that the company will be able to reverse the ruling upon appeal.

W&T Offshore is in an enviable position. The company has low-decay assets that have continued to produce, even at lower capex levels. For 2017, it has increased revenues and margins, getting back to margin levels not seen since 2014, when oil and gas prices were at least double what they are today.  It has healthy liquidity, enough to retire this debt at maturity. These short-term 22-month bonds are already part of our Distressed Debt 1 portfolio and with the most recent outstanding quarterly results, we intend to increase weighting in both the Distressed Debt 1 and FX2 managed income portfolios.  The most recent performance of our Distressed Debt 1 Hedge Fund is shown below.

At Durig, we provide investors with a specialized, transparent fiduciary service at a very low cost. To obtain higher yields and keep costs as low as possible, we typically bundle smaller retail orders into larger institutional sized orders with many global trading firms and bond platforms.  Our professional service enables access to a greater spectrum of bonds, higher yields, and lower price points.  Most of our client accounts are custodied in their own name at TD Ameritrade Institutional, a large discount service provider that is SPIC insured.

Disclosure: Durig Capital and certain clients may have positions in W&T Offshore 2019 bonds.

Please note that all yield and price indications are shown from the time of our research. Our reports are never an offer to buy or sell any security.  We are not a broker/dealer, and reports are intended for distribution to our clients.  As a result of our institutional association, we frequently obtain better yield/price executions for our clients than is initially indicated in our reports.   We welcome inquiries from other advisors that may also be interested in our work and the possibilities of achieving higher yields for retail clients.

A+ Rating with the BBB!
Durig.com I Distressed Debt 1 Hedge Fund