This week’s bond review focuses on an independent oil and gas producer operating in the deepwater regions of the Gulf of Mexico. W&T Offshore (WTI) has done an outstanding job of reducing debt and operating costs, all while keeping production stable.

WTI’s 2019 bonds, couponed at 8.50% are currently selling at the deep discounted price of around 47, with yield indications over a whopping 45%. For investors willing to look under the surface of the reported financials, there are gems to be found. WTI has exhibited extremely healthy adjusted EBITDA margins historically between 45% and 67%. These bonds are currently a part of our top-performing hedge fund, Distressed Debt 1 LP, and we think they represent an overlooked opportunity for investors looking to increase both cash flow and overall portfolio returns. Therefore we have also marked them for addition to both our FX1 and FX2 high yield global income portfolios.

Founded in 1983, W&T is an independent oil and natural gas acquisition, exploitation and exploration company, with a focus primarily in the deep waters of the Gulf of Mexico. The company’s founder and CEO, Tracy Krohn, has been leading W&T for the past 31 years. It has developed significant technical expertise and has successfully discovered and produced properties on the conventional shelf and in the deepwater across the Gulf of Mexico. The company owns working interests in 54 fields in federal and state waters and have interests in leases covering approximately 750,000 gross acres. In 2015, W&T sold the West Texas Permian Basin properties that had been acquired in 2011.  W&T began trading on the NYSE under the ticker symbol “WTI” in 2005.

In response to the continued low oil and gas price environment, many oil and gas exploration and production companies have looked to curb operational costs as much as possible.  W&T has done a fantastic job of reducing its ongoing costs over the past few years as oil and gas prices decreased and continue to remain at historically low levels. In its most recent reported financial result for the quarter ended September 30, 2016, the company’s Lease Operating Expenses (LOE) were down by 23.2% over the same period in 2015.  As a result of the company’s ongoing cost cutting efforts, LOE have been cut significantly since 2014. 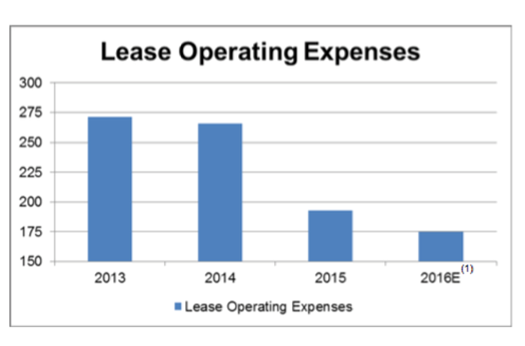 Additionally, W&T’s General and Administrative costs (G&A) have also been coming down. In the third quarter, G&A expenses were down by 23.2% as compared to the same period in 2015.  Since 2014, the company has cut its G&A expenses by 40% as it has remained diligent about cost controls in the ongoing low price oil and gas environment. 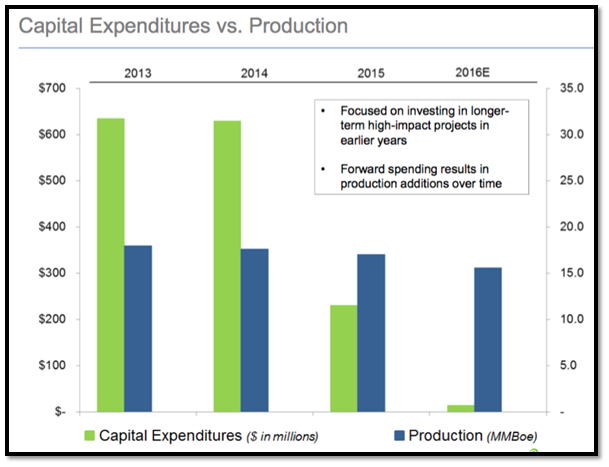 The company also continues to focus on projects that yield the most production for the smallest amount of cost. In the company’s lucrative Mahogany field, it has a number of recompletion and workover opportunities planned which offers low risk and solid returns from wells that were drilled in stacked reservoirs with multiple pay zones. These projects will help maintain W&T’s production profile with a modest capital budget.

In July 2016, W&T Offshore announced an exchange offer to eligible holders of the 8.50% 2019 notes. By executing the exchange offer, W&T not only reduced its outstanding long-term debt by $408.2 million, but it effectively pushed out the maturity on a large portion of its debt. In addition, the reduced debt load will also translate into reduced annual interest payments – by management’s estimates between $50 million and $60 million each year. This will allow the company some much desired breathing room as it waits out the low price oil and gas environment.

Digging deeper into W&T’s financials from its latest quarterly results reveals a company that has surprisingly robust interest coverage considering the prolonged low price environment in the oil and gas industry. A calculation of operating income from its Q3 report totals $51.14 million, without factoring in the non-cash charges of depreciation and write-down expense.  Its Q3 interest expense was $23.7 million, giving W&T an interest coverage ratio of 2.2x.  With the recent completion of the notes exchange offer, ongoing interest expense will decrease substantially, increasing interest coverage moving forward.

The default risk is W&T’s ability to perform.  As the low price oil environment has continued, the company has done a masterful job at bringing down operating costs while minimizing production decreases.  With its recent exchange offer completed, it has significantly reduced its long term debt and more importantly, pushed out the maturities on when that debt comes due. While it is difficult to predict when oil prices will begin to steadily increase, W&T is taking the necessary steps for the company to remain viable in a low priced oil environment. Therefore, it appears that the extrodianarily high 45% yields on these 2019 notes outweigh the risks we can identify.

In February 2016, W&T received orders from the Bureau of Ocean Energy Management (BOEM) demanding the company provide additional financial security on certain federal offshore oil and gas leases, rights of way and rights of easement. The outstanding orders total $260.8 million.  WTI filed appeals with the Interior Board of Land Appeals and are actively seeking to resolve the issue through settlement discussions with BOEM. The company has received a stay on the orders until January 31, 2017. If WTI is forced to pay the full amount, this could have a significant impact on the company’s profitability. However, with a new administration coming to power in early 2017, regulations influencing these orders could change. Many analysts predict that the Trump administration will reduce regulations and restrictions that have affected the oil and gas business.

These June 2019 bonds, couponed at 8.5% and currently indicating an astounding 45% YTM, have a similar duration and risks to other high yield bonds reviewed on Bond-Yields.com site, such as the 16% BakerCorp  and 28.5% ION Geophysical bonds.

As the oil and gas industry braces for the “lower for longer” oil price environment, W&T Offshore forges ahead.  It smartly executed a bond exchange that lowered its overall long-term debt, delayed the maturities of a significant portion of its long-term debt and dramatically lowered its ongoing annual interest expense.  This, combined with the company’s cost cutting efforts in its lease operating expenses and general and administrative expenses have positioned W&T to weather continued low oil prices.  While it has drastically cut capital expenditures, the company is minimizing production declines, spending only where it can add production for low cost. The astonishing 45% yield on the company’s 2019 bonds are an excellent opportunity for investors to increase cash flow and overall portfolio returns, and are marked for addition to have met our criteria for addition to both our Fixed-Income1.com and Fixed-Income2.com global high-yield income portfolios.

Tell us what your looking for, or if you have questions about US bond.

Disclosure: Durig Capital and certain clients may have positions in W&T Offshore 2019 bonds.

Please note that all yield and price indications are shown from the time of our research. Our reports are never an offer to buy or sell any security.  We are not a broker/dealer, and reports are intended for distribution to our clients.  As a result of our institutional association, we frequently obtain better yield/price executions for our clients than is initially indicated in our reports.   We welcome inquiries from other advisors that may also be interested in our work and the possibilities of achieving higher yields for retail clients.