This week Durig Fixed Income 2 (FX2) bond review focuses on a company involved in tertiary oil production. Denbury Resources produces oil using carbon dioxide injections to draw more oil out of fields that have exhausted their production from conventional methods. As oil prices have begun to stabilize, Denbury has been preparing to increase its production through shrewd acquisitions and redeveloping select sites of its existing assets. The company has also worked diligently to bring down costs and strengthen its balance sheet.

With long-producing assets, Denbury’s production is more stable than shale oil wells, which have been the main source of the U.S. oil boom in recent years.  Denbury has issued 2021 bonds couponed at 6.375% which are currently trading at a significant discount, giving them an outstanding yield-to-maturity of nearly 18%.  With its unconventional oil production technique, these bonds are a unique addition to our FX2 managed income portfolio, the third quarter end 2017 performance of which is shown below.

Christian Kendall, President and CEO of Denbury Resources was pleased with the company’s progress in the second quarter, indicating that Q2 was “very strong for Denbury”. The company registered several accomplishments that were on track with management’s expectations.  Some of these accomplishments included:

As with many oil producers, Denbury has revamped its operations to be more efficient in light of the low oil prices over the past 3 years. Here are some positive steps the company achieved in 2016 to remain competitive.

Denbury continues to strive to make progress on its cost reduction initiatives.  The company expects additional cost reductions in 2018 in excess of $50 million.

Another significant development for Denbury earlier this year, was its purchase of interest in the Salt Creek field in Wyoming.  In May 2017, Denbury entered into an agreement with Linn Energy to acquire 23% of  non-operated working interest in the Salt Creek Field. With this new interest in Salt Creek, Denbury gains net production of 2,100 boe/day (barrels oil equivalent / day), which is expected to increase over the next several years.  Due to this acquisition, the company has revised its full-year 2017 production guidance to an expected range of 60,000 to 62,000 boe/day (up from previous guidance of 58,000 to 62,000 boe/day).

Headquartered in Plano, Texas, Denbury Resources, Inc. is an independent oil and natural gas company with 254.5 MMBOE of estimated proven oil and natural gas reserves as of December 31, 2016, of which 97% is oil. Denbury’s operations are focused in two key operating areas: the Gulf Coast and Rocky Mountain regions. The company’s goal is to increase the value of its properties through a combination of exploitation, drilling and proven engineering extraction practices, with the most significant emphasis relating to CO2 enhanced oil recovery operations. As of December 31, 2016, Denbury Resources had 1,058 employees, 577 of whom were employed in field operations or at field offices.

What is CO2 Enhanced Oil Recovery?

With much of the easy-to-produce oil already recovered from U.S. oil fields, producers have attempted several tertiary, or enhanced oil recovery (EOR), techniques that offer prospects for ultimately producing 30 to 60 percent, or more, of the reservoir’s original oil in place.  The most promising of these techniques is gas injection, which uses gases such as natural gas, nitrogen, or carbon dioxide (CO2) that expand in a reservoir to push additional oil to a production wellbore. Gas injection accounts for nearly 60 percent of EOR production in the United States. Denbury has been successfully using this type of tertiary oil recovery in its operations.

The explosion in shale oil / fracking in the past 10 years has greatly reduced the amount of oil the United States imports. What many may not know is that shale oil wells have a very short life. They produce robustly for a relatively short period of time, then production declines very rapidly. What this means for fracking companies is that they continue to have to put holes in the ground to keep production stable (even more if they want to increase production). Here is a typical decline curve for a shale oil well.

Enhanced oil recovery (EOR) from established oil fields is typically less risky, since the operator (Denbury) is drilling in an area that has had steady primary oil production. Denbury’s assets decline at at a significantly slower rate than shale oil wells, which means less capital for exploration. And while some may think that tertiary (or EOR) production only yields a small amount of oil, the following graphic shows that tertiary production yields almost as much as primary and secondary oil production. 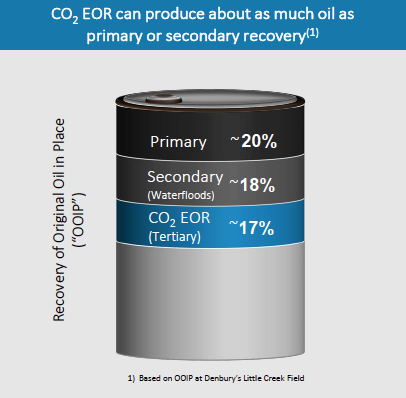 Interest coverage is of paramount importance for bondholders as it indicates the ability of the issuer to service its debt. For its latest quarter, Denbury generated $75.9 million in operating income (without the non-cash expense of depreciation) with $43.4 million in cash interest. This equates to coverage of 1.7x.  The company had adequate liquidity as of June 30, 2017, with $3.5 million in cash with another $500 million of remaining borrowing base availability.

The default risk is Denbury’s ability to continue its trajectory of decreasing costs and increasing production. The company made significant progress in cost reductions in 2016 and appears to be continuing that trend in 2017. In addition, the company projects another $50 million in cost savings in 2018. Denbury has been able to hold production steady this year even with its recent decrease in forecasted 2017 capital expenditures. Their recent acquisitions have resulted in production increases that should continue to grow over the next few years. In addition, the company’s current assets have significant untapped potential, some of which the company is beginning to realize through reworking existing sites. Denbury’s 2021 bonds have recently been trading at a significant discount, giving them an outstanding yield-to-maturity of nearly 18%. With the company’s excellent progress on decreasing costs and moving towards production increases, the outstanding yield-to-maturity on these bonds does appear to outweigh the risks identified here.

Although Denbury has made acquisitions in the past few months that have been immediately accretive to its production, that may not always be the case. Relying on acquisitions for production growth is not a guaranteed method to increase production.

Denbury Resources has been diligently reducing costs and the company’s new CEO is looking to pump up production by redeveloping select sites of its current assets and by shrewd acquisitions of new assets, such as their newly acquired interest in the Salt Creek Field in Wyoming.  The company’s tertiary oil production techniques yield nearly as much oil as traditional, primary, and secondary production, with less risk. With recent oil prices appearing to stabilize, this could provide the incentive needed for Denbury to move forward on its planned redevelopment projects. Denbury’s 46-month bonds, maturing in August of 2021, currently have a yield-to-maturity of nearly 18%, which makes a them an outstanding addition to our FX2 managed income portfolio, the benchmarked third quarter end 2017 performance of which is shown above.

Disclosure: Durig and certain clients may have positions in Denbury Resources 2021 bonds.

A+ Rating with the BBB!
Durig.com I Distressed Debt 1 Hedge Fund

Pick up 6.34% YTW Call December 2017 with The McClatchky Company, Fixed Income Bond Review Due December of 2022