This week we take our third look at the second largest propane dealer in the U.S. We first reviewed Ferrellgas in September 2015 and again in September 2016. Since our last review, there have been several positive developments:

Ferrellgas is looking to redeem its oil and gas midstream assets as it continues to focus on its core of propane distribution. James Ferrell has a large personal stake in the company and has already made management changes as well as commitment to shoring up the balance sheet. As these steps begin to affect the company’s ongoing business, this should work in favor of stockholder and bondholders. The company’s June 2020 bonds, couponed at 8.625%, with a yield to maturity of about 9% make a solid portfolio addition for additional diversification in the energy sector.  We like the competitive yields on these bonds and will consider them for  additional weighting in our FX1 and FX2 income portfolios.

Since Our Last Review

Our last review of Ferrellgas Partners was in September 2016, just prior to the company’s release of its fiscal fourth quarter and full year 2016 results. Since that time, there have been several changes at Ferrellgas worth noting. The biggest change came in late September last year when Ferrellgas CEO Stephen Wambold was replaced with former CEO and founder, James Ferrell. Ferrell helped build the company that bears his name and has a personal vested interest in ensuring the continued success of it – he personally owns about five million units of Ferrellgas Partners.

Ferrellgas 2016 fiscal year results were impressive, given the headwinds of warmer winters in North America the past few years.  Fiscal year (FY) 2016 adjusted EBITDA was $345 million compared to $300 million for FY2015, an increase of 15%. In addition, full year gross profit increased 9.75% year-over-year coming in at $878 million compared to $800 million in FY2015. This increase was mainly due to the increased contribution from the company’s Bridger Logistics unit.

Ferrellgas’ latest quarterly results (for the three months ended January 31, 2017) showed excellent operating income for the twelve months ended January 31, 2017.  Without the large asset impairment of $628.8 M taken in fiscal Q4 2016, Ferrellgas registered $114.3 million in operating income, compared to $74.2 million in the previous year’s period, reflecting an outstanding increase of 54%. This asset impairment is covered in more detail later in this review.

Since one of the main uses of propane in this country is for household heating, Ferrellgas propane sales are heavily influenced by seasonal temperatures, especially in the colder, winter months. 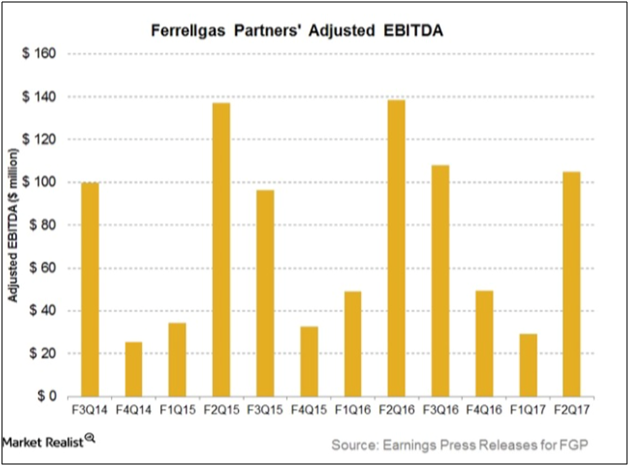 This past winter was 4% colder than the previous year, but still 14% warmer than normal. In spite of this, Ferrellgas was able to increase the number of propane gallons sold by 7% year-over-year in its latest quarterly results (fiscal Q2 ended January 31, 2017), mainly due to its efforts to increase market share.

Ferrellgas is a leading U.S. distributor of propane and propane related equipment. The company is based in Overland Park, KS and currently employs nearly 4000 people nationwide. In Ferrellgas’ 80-year history, the company has grown primarily through acquisitions, purchasing more than 235 businesses.  The company also provides oil and gas midstream services to major energy companies in the United States through its two midstream segments, Sable Environmental (acquired in May 2014) and Bridger Logistics (acquired June 2015). The company also generates sales from portable tank exchanges, nationally branded under the name Blue Rhino, through a network of independent and partnership-owned distribution outlets. Its residential and agricultural customers generally live in rural areas, whereas its industrial/ commercial and tank exchange customers generally reside in more urban areas.

Presently, the propane industry is made up of a few big players and many smaller players, mostly small, regional suppliers.  Today, Ferrellgas comes in as the second largest propane distributor in the United States, with operations in all 50 states. Propane has a wide range of uses beyond what most people consider – backyard grilling and portable cook stoves. Farmers use propane for irrigation pumps, grain dryers, standby generators and other farm equipment. It is an essential fuel for crop drying, flame cultivation, fruit ripening, space and water heating and food refrigeration. Millions of families nationwide also use propane daily for furnaces, water heaters, cooktops, outdoor grills, fireplaces, generators, and other appliances. In rural areas of the country, propane distribution, by nature, is usually a geographic monopoly, meaning there is usually only one distributor in an extended rural area. Ferrellgas has used this to its advantage, actively acquiring and continuing to solicit regional propane suppliers / distributors who might be interested in selling their operations. This strategy has paid off, making Ferrellgas the second largest propane distributor in the nation.

Interest coverage is of particular interest for a company’s bondholders as it indicates the company’s ability to pay bond interest when payments come due. For its latest reported quarterly results (for the three months ended January 31, 2017), Ferrellgas had operating income of $75.2 million and interest expense of $36.8 million for interest coverage of 2.0x.  Ferrellgas also has a healthy amount of cash on hand. As of January 31, 2017, the company had $14.7 million of cash on hand.

Ferrellgas has also continued to pay its unitholders a quarterly distribution.  The company recently declared a Q2 cash distribution of $0.10 per common unit.  While these distributions do not affect bondholders, bondholders should be encouraged as this dividend level provides an extra cash cushion in the event the company experiences quarterly volatility in its cash flows.

Another development that was recorded during Ferrellgas fiscal Q4 2016 was the large $658 million write-down related to its oil and gas midstream operations (Sable Environmental and Bridger Logistics).  This was primarily due to the loss of Bridger’s largest customer via Jamex Marketing. Ferrellgas terminated its agreement with Jamex Marketing, and provided a secured promissory note from Jamex and settlement of amounts still owed to Ferrellgas. However, Ferrellgas does not anticipate any material contribution to revenue EBITDA from Jamex or the customer in the future. Since 80% of the FY2016 adjusted EBITDA from Bridger was generated by this customer, Ferrellgas made the decision to write-down a significant amount of Bridger’s value.

The default risk is Ferrellgas’ ability to perform.  Having a member of the company’s founding family recently returned to the CEO position is encouraging, especially considering his large personal ownership position in Ferrellgas. In addition, although the company recently wrote down the majority of the value of its Bridger Logistics unit, it has installed new management at Bridger and is driving towards new sourcing deals. Finally, Ferrellgas did show outstanding operating income growth for the twelve months ending January 31, 2017, increasing 54% year-over-year. In light of these factors, the excellent 9.5% yield-to-maturity on these June 2020 bonds appears to outweigh the risks identified.

Ferrellgas’ revenue stream from the sale and distribution of propane varies throughout the year due to seasonal temperature changes. There is increased demand during the winter months (for heating residential and commercial buildings). As a result, the company’s revenues are higher during the second and third fiscal quarters (which occur during peak winter months).  One of the ways Ferrellgas levels these revenues during other times of the year is through its portable tank exchange propane sales via its Blue Rhino division.  These sales provide increased operating profits during the company’s first and fourth fiscal quarters due its counter-seasonal business activities.

This bond issue from Ferrellgas have similar yields and durations to other bond issues reviewed at Bond-Yields.com, including the  9.5% to 11.2% Kindred Healthcare and 17.5% Northern Oil and Gas bonds.

Ferrellgas had fantastic results for its FY2016. Now it is refocusing on its core of propane while beginning to rebuild its midstream assets. The return of James Ferrell as CEO is a definite positive as he has a vested interest in ensuring the company’s continued profitability. It’s latest financials showed growth in the amount of propane sold, fantastic interest coverage and impressive 12-month operating income growth.  Therefore, the company’s 37-month bonds, couponed at 8.625% and a yield-to-maturity of about 9% are marked for additional weighting to both our FX1 and FX2 managed income portfolios.

At Durig Capital, we provide investors with a specialized, transparent fiduciary service at a very low cost. To obtain higher yields and keep costs as low as possible, we typically bundle smaller retail orders into larger institutional sized orders with many global trading firms and bond platforms.  Our professional service enables access to a greater spectrum of bonds, higher yields, and lower price points.  Most of our client accounts custodian in their own name at TD Ameritrade Institutional, a large discount service provider that is SPIC insured, or at Interactive Brokers.

We track thousands of bond issues and their underlying fundamentals for months, sometimes years, before finding any that achieve or surpass the targeted criteria we have found to be successful.  Our main priority is to provide the best opportunities for our clients.  Our bond reviews are published on the Internet and distributed through our free email newsletter to thousands of prospective clients and competitive firms only after we have first served the needs of our clients.  Bond selections may not be published if they have very limited availability or liquidity, or viewed as not being in the best interests of our clients. When high yielding bonds with improving fundamentals are acquired at lower costs, Durig Capital believes that investors will appreciate earning higher incomes with our superior high income, low cost, fiduciary services. Please note that all yield and price indications are shown from the time of our research. Our reports are never an offer to buy or sell any security. We are not a broker/dealer, and reports are intended for distribution to our clients. As a result of our institutional association, we frequently obtain better yield/price executions for our clients than is initially indicated in our reports. We welcome inquiries from other advisors that may also be interested in our work and the possibilities of achieving higher yields for retail clients.

Disclosure: Durig Capital and certain clients may have positions in Ferrellgas June 2020 bonds.

Pump Out Over 13% YTM with Ferrellgas, Bonds Mature May 2021