This week’s bond review takes a second look at Legacy Reserves (LGCY), an oil and gas producer that continues to decreasing debt and expenses, while increasing production.  When we first reviewed Legacy Reserves in July 2016, the company had taken steps to stay lean (cost reductions) while still retaining the ability to be agile, by forging a joint venture agreement to add production at minimal cost. This low-cost producer continues to make progress on the initiatives set earlier this year.

Given the minimal hedging used by Legacy, recent increases in both oil and natural gas prices should start passing through to Legacy’s bottom line in Q4. The company has also recently added to its high-quality, low-decline production assets in the Permian Basin, an astute decision by management to continue positioning for future increased production. Although the price of these 48-month bonds has risen since our last review, the discounted price of about 70 still represents a yield to maturity over 19%, making it an excellent addition to our FX1 and FX2 portfolios.

We last reviewed Legacy Reserves in July 2016. Since that time, the company has continued to make progress on its key initiatives including:

These three actions are a solid model for any company looking to not only succeed, but to move ahead of the competition. In addition to these initiatives, the company also recently closed on $6.6 million of acquisitions in the Permian Basin, one of its core operating areas. A recent assessment by the United States Geological Survey of the Wolfcamp Shale  in the Permian Basin, estimates that there are 20 billion barrels of undiscovered, technically recoverable oil in the Wolfcamp alone. Legacy’s recent Permian acquisition illustrates management’s drive to continue to search out opportunities to enhance and maximize the company’s operating efficiencies within its existing core assets.

Legacy Reserves LP is a master limited partnership headquartered in Midland, Texas, focused on the acquisition and development of oil and natural gas properties primarily located in the Permian Basin, Mid-Continent and Rocky Mountain regions of the United States. Its primary business objective is to generate stable cash flows from the acquisition and development of long-lived oil and natural gas properties, allowing the company to support and increase quarterly cash distributions over time. Since 2006, Legacy has made 137 acquisitions of producing properties for approximately $2.6 billion. In its efforts to generate stable cash flows and reduce its commodity price risk, the company has an active oil and natural gas hedging program.

Many oil and gas producers have cut capital expenditures for exploration and new drilling activity to a minimum in light of the historically low oil and gas prices. And while Legacy Reserves has also had a significant decrease in the amount of capital spent on new drilling activity, the company still posted production increases for the nine months ending September 30, 2016. For that time period, production increased 23% to 44,372 Boe/day from 36,194 Boe / day, primarily due to acquisitions in the second half of 2015.

In addition, Legacy continues its partnership with TPG Special Situation Partners (TSSP). Under this agreement, TSSP initially funds 95% of Legacy’s development costs in specific Permian Basin properties. In exchange for the upfront development costs, TSSP has a scaled interest in the wells’ production, beginning at 87.5% and decreasing to 15% as certain return parameters are met. This agreement maximizes the potential of Legacy’s high-quality, underdeveloped Permian acreage, reduces its capital expenditures in capital intensive, high-cost horizontal drilling and maintains a long-lived, low-decline production profile.

In our last review, Legacy had made fantastic progress on decreasing its average cost per Boe (barrel oil equivalent) production expenses, posting a decrease of 25% to $11.26 per Boe in Q1 2016 as compared to 2015.  Incredibly, the company has continued this trend. For the nine months ending September 30, 2016, Legacy Reserves production expenses, on an average cost per Boe basis, decreased by 23% over the same period in 2015, going from $13.63 per Boe to $10.55 per Boe.   As part of this decrease, general and administrative costs decreased 21.3% for the first nine months of 2016 (as compared to the same time period 2015), and lease operating expenses have also decreased 17% year-to-date.

As discussed in our last review of Legacy Reserves earlier this year, the company has been focusing on deleveraging its balance sheet this year. The main source of funds for the repayment of debt has been the sale a selected portion of Legacy’s assets.  As of October 31, 2016, Legacy had completed asset sales totaling $96.1 million year-to-date. The proceeds from these sales have been used to improve Legacy’s balance sheet. Year-to-date, Legacy has reduced its total debt by $284.4 million.  The distribution of debt repayment, which is outlined in the company’s Q3 earnings release, is reproduced here.

The good news on the natural gas front is that prices have been increasing. Prices have surged in recent weeks to their highest levels in two years as an unusually warm autumn has given way to below average temperatures for this time of year. About half of all U.S. homes use natural gas for heat, making winter weather typically the market’s biggest driver for demand and often leading to winter price spikes. The recent price spike can be seen here. 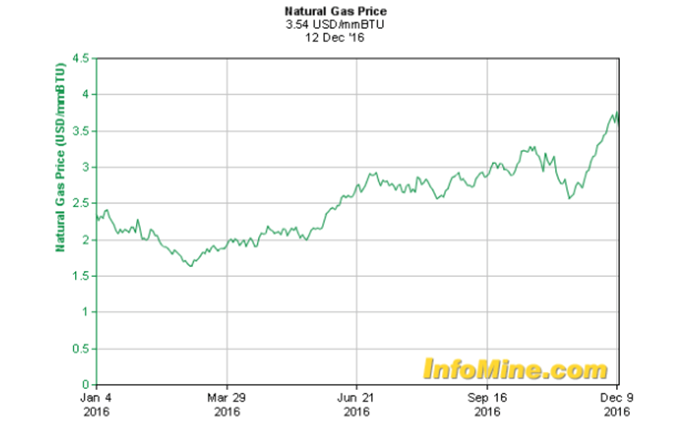 A recent deal announced by the Organization of Petroleum Exporting Countries (OPEC) has favorably affected oil prices. On November 30, 2016, OPEC agreed to cut production from 33.8 million barrels a day (b/d) to 32.5 million b/d in an effort to prop up prices. On December 5th, light, sweet crude for January delivery settled up 11 cents, or 2%, to $51.79 a barrel on the New York Mercantile Exchange. It is the highest settlement since July 14, 2015.

For the nine months ending September 30, 2016, Legacy had operating income of $94.7 million (without depreciation and impairment charges) and interest expense of $62.6 million for an interest coverage ratio of 1.5x.  While this coverage is lower than what we normally like to see, Legacy has steadily reduced its debt this year along with increasing its production. The recent increases in oil and natural prices should help raise revenues and profitability moving forward.

The default risk is Legacy Reserves’ ability to perform. Many production companies have struggled in this unprecedented decline in oil and gas prices. However, Legacy has been taking steps to ensure its longevity. Early in 2016, the company suspended distributions to its unitholders. It has spent the balance of the year focusing on shoring up its balance sheet through debt reduction and reduced production costs 23% over 2015 levels. In addition, Legacy continues to look for opportunities to increase its production levels.  While there is still work to be done in these areas, the outstanding 21+% yields on the company’s 2020 bonds appear to outweigh the risks identified here.

Legacy generates its revenues from the sale of oil and natural gas. While both oil and natural gas have experienced significant price volatility in the last few years, both appear to be making a recovery. The recent OPEC deal has favorably affected oil prices and natural gas prices have also seen a price spike in recent weeks. Both of these developments bode well for Legacy to increase its future revenues if prices continue to rise.

These 48-month, 19% yielding bonds have similar duration and yield to others on Bond-Yields.com, including the 17.5% Northern Oil and Gas and 19.5% Temple Hotels bonds.

Legacy has continued its positive trajectory set earlier in the year – paying down debt, reducing production costs and increasing production. The company has reduced debt by nearly $300 million this year. With production costs at $10.55 per barrel, Legacy is likely one of the lowest cost producers in the country. The recent increases in both oil and natural gas prices should increase company profitability as revenues increase. And management is still keen to add production, based on Legacy’s recent $6.6 million acquisition in the Permian Basin. While the 19+% yield on these 48-month bonds has decreased since our last review of Legacy earlier this year, these bonds are still a sound addition for investors looking to pump up portfolio returns.  Therefore we are opportunistically adding these 48 month bonds from Legacy Reserves to our Fixed-Income1.com  and Fixed-Income2.com global high yield fixed income portfolios at prices around an 19% yield to maturity.

Tell us what your looking for, or if you have questions about US bond.

Disclosure: Durig Capital and certain clients may have a position in Legacy Reserves LP Corporate bonds.

Increase Your Cash Flow With Over 31% Yields From Legacy Reserves Bonds, Maturing December 2020